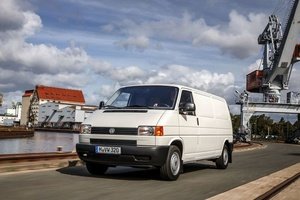 With the launch of the 4th Generation of the Transporter (T4) light commercial vehicle three decades ago came the arrival of Volkswagen’s first van with front-wheel drive
With around two million units produced, the T4 led Volkswagen Commercial Vehicles into a new technical era

30 years ago, Volkswagen’s realignment of its commercial vehicle range was a paradigm shift: in September 1990 – after production of 6.7 million T1, T2 and T3 models with the engine at the back – a new era of front-engine vans began with the launch of the T4. For the first time in the history of the Bulli now only the front axle was being driven. Modern in-line engines with regulated catalytic converters replaced the venerable old boxer engines. Ahead of its launch the company had invested over two billion marks in redeveloping the Bulli. It would turn out to be a good investment.

In September 1990 – just a few weeks before East and West Germany again became one – Volkswagen delivered the first new T4 models to its dealers. As Europe grew together again, the switch from rear- to front-wheel drive also saw everything change on the new T4: the design, the suspension, the engines and the space on offer. Above all at the back, where on the T3 the boxer engine still needed its space, much more room was now available. The new drive system and suspension layout moved the van’s performance even closer to that of a passenger car. Volkswagen also significantly improved the crash characteristics of the completely new bodywork.

The extra space made the range more versatile
For the first time, Volkswagen was now offering the van with two different wheelbases. The new body construction also made it possible to offer a low-loader pick-up and a modular driver’s cab concept for industry-specific superstructures. Meanwhile, with its diverse fittings made up of bed, folding table and individual seats on the second row, the Multivan utilised the extra space in the interior especially cleverly. The front-engine concept also brought with it completely new freedom for fitting out the iconic California camper. 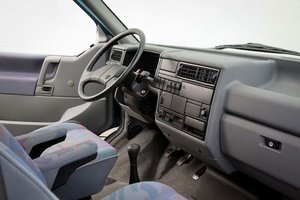 Volkswagen Commercial Vehicles becomes independent and the T4 is perfected
In 1995, Volkswagen Commercial Vehicles became a stand-alone Volkswagen AG brand. One year later, the T4 was given a comprehensive model update. The passenger car / camper van versions were identifiable by white rather than yellow indicator lights and the ‘Happy Face’ now favoured by Design. In parallel, the front of the Multivan, Caravelle and California was made longer. Disc brakes all round, energy-absorbing bumpers, a new array of wheels and headlights in a tapered, wedge-shaped design enhanced the appearance of the entire T4 range.

There were some particularly big changes under the bonnet. The T4 was powered by a 2.5-litre five-cylinder engine delivering 75 kW (102 PS), the first turbo diesel direct injection engine (TDI). The longer front of the Multivan, Caravelle and California also facilitated the use of a new six-cylinder petrol engine with 2.8 litres cubic capacity and power output of 103 kW (140 PS). In 1998, Volkswagen Commercial Vehicles added a further engine: a 2.5-litre TDI delivering 111 kW (151 PS), the most powerful diesel in the T4 range. At the turn of the millennium, the V6 also revved the power up further, now developing 150 kW (204 PS).

As with the T3, the final model was an exclusive ‘Limited Last Edition’
The Multivan ‘Limited Last Edition’ with a very exclusive standard specification heralded the T4’s finale in 2003. The premium features included leather alcantara seats. By the time the highly successful product line made way that same year for the T5, around two million units of this pioneering van generation had been produced. 2020 – 30 years after the debut of the product line – the first T4 models are being honoured as classic vehicles with the H registration plate. In particularly high demand currently – regardless of age – are the California models, the specials, like a ‘Limited Last Edition’ and the V6 versions. It seems very much as though as a classic the T4 can look forward to just as exciting a future as the T1, T2 and T3 already enjoy. 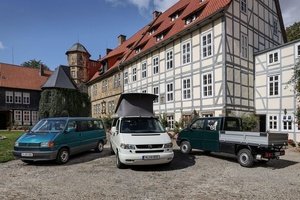