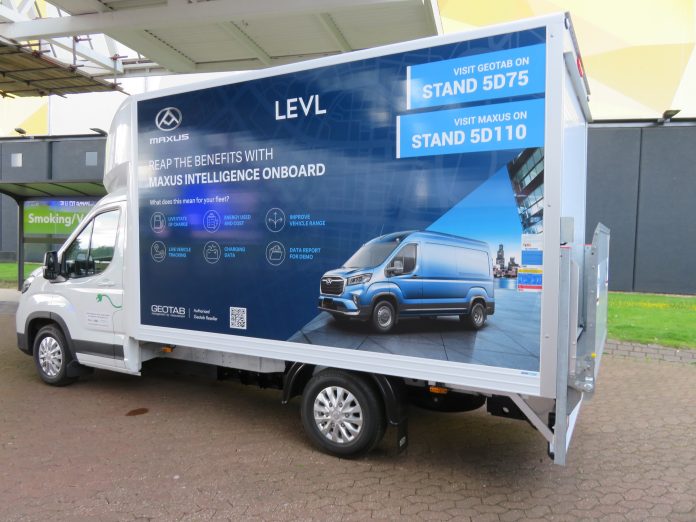 More than 230 exhibitors showcased new products, services and innovations at the 2022 Commercial Vehicle Show, which closed its doors at the NEC, following three days of extensive business. Strong visitor numbers (11.000), combined with a large array of exhibitors spanning the road transport sector and speaker sessions generating a good atmosphere throughout the Show.

A number of high profile exhibitors chose the Show as the place to launch their new product lines, including Harris Maxus LCVs, TruTac fleet compliance and Locks4Vans next-generation security.

Ford’s stand was perpetually busy. Mandy Dean, Director, Commercial Vehicles, Ford of Britain & Ireland, said: “The Show was absolutely phenomenal for us. From Day One, huge visitor numbers have come to the stand to learn all about our new products and services. Footfall was great, quality of conversations with fleet managers, all sorts of industries – it’s been fantastic. We always use the Show to invite our existing customers but we’ve met lots of new people as well. The stand was mobbed and was like that all three days.”

The 2022 Show was Harris Maxus’ biggest ever display and General Manager Mark Barrett was delighted. “Throughout the Show there was a fantastic buzz around our stand,” Barrett said. “Showcasing no fewer than 12 electric vehicles, the Maxus line-up included our two newest entrants to the UK market, the Maxus MIFA 9 MPV and T90EV pick-up truck, which were unveiled on press day amid much fanfare. In addition to meeting hundreds of visitors during the Show, we were doing business; generating not just leads, but securing sales right across our range.”

TVL Security announced an initiative designed to support van drivers when they are victims of theft and supported by the police nationwide. Laura Moran, Managing Director of TVL Group says, “We have had a really successful CV Show this year and it’s great to see more and more people attending. We have had great engagement on our Ford Factory Fit Security options and it has been the perfect opportunity to launch the ‘Tell TVL’ initiative which has been received so positively. We’ll definitely be back next year.”

Ellis concludes, “We’d like to thank all our exhibitors, both new and returning, for providing so many outstanding products and services, which resonated with the thousands of visitors who attended. We now start planning what will be an even better 2023 event, enhancing its reputation as the pre-eminent UK Commercial Vehicle Show.”

The 2023 Commercial Vehicle Show dates have been confirmed. Next year’s Show will take place at the NEC, Birmingham from 18 – 20 April 2023.