Home COVID-19 Appointment of a new CEO to the RSA

A new CEO at the Road Safety Authority (RSA) is take over from Moyagh Murdock, the national agency that has made an impressive record in making our roads safer and reducing fatalities. However, the new appointee Sam Waide has a big challenge facing him, in these changing times.

In one of his final appointments before leaving office, Shane Ross, Minister for Transport Tourism and Sport, has appointed Sam Waide as the in-coming Chief Executive Officer (CEO) of the Road Safety Authority (RSA).

The appointment followed an open recruitment competition hosted by The Public Appointments Service (PAS). Over fifty applicants applied for the position from Ireland and abroad.

Sam is currently Executive Director of Operations and Board Member of the Business Services Organisation within Northern Ireland’s Health & Social Care Service. He has been in this position since June 2014 and is responsible for over 600 staff and contractors, with an operating budget of £70 million and £2.3 billion Public expenditure.

Prior to his current position Sam’s career has spanned private and public sectors in the UK and Ireland where he held positions of increasing responsibility with BMW Group, PWC Consulting, Publicis Sapient Global Markets and BAE Systems UK.

Sam brings a wealth of Leadership and Management experience to the RSA especially in the areas of business transformation, commercial acumen, governance and compliance. One of his many positions included the development of the National Car Test Service (NCTS) contract some years ago. He has a Bachelor of Technology degree from University of Ulster and a Master’s in Engineering and Business Management from the University of Warwick. 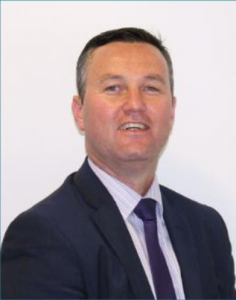 As CEO, Sam will be based at the RSA Headquarters in Ballina, County Mayo and will transition to his position in September 2020.

Speaking at his appointment Minister Ross said:  “Both the Board and I are delighted to welcome Sam to the RSA and wish him every success in his position as CEO. I wish to acknowledge again the important contribution Moyagh Murdock has made to the work of the RSA during her six years as CEO. Moyagh certainly enhanced the reputation of the RSA both in Ireland and internationally and she leaves the RSA pointed on a strong positive trajectory for further improvements in road safety. We wish her all the very best in her new position with Insurance Ireland.”