Home Breaking News Being out of pocket and losing time are two of the biggest...

The main barriers to going electric are:

Ford’s latest Go Electric report has uncovered that, while there are more electric vehicles on the road, the UK’s knowledge of electric vans still lags behind. The report includes the views of 500 van drivers* in the UK and found considerable gaps in their knowledge of electric vans and the benefits to their businesses, leading to barriers preventing full electric adoption. This comes as the first jumbo E-Transits are delivered and the smaller E-Transit Custom is announced.

Range anxiety is seen as one of the main concerns of van drivers, with the average range of an electric van thought to be under 70 miles. This is three times less than the actual range of the E-Transit, offering a range of up to 196 miles.**

The pressures around time management continue, with almost half (44%) of van drivers believing they wouldn’t be able to fit charging time into their working schedule. This may stem from a lack of charging options available, with only 20% of respondents saying there are always charging points available at work, and over half (52%) saying they don’t have access at home. On top of this, only 42 per cent of van drivers said they knew how to charge an electric vehicle.

Drivers of company owned electric vans were concerned about being out-of-pocket with 7-in-10 (71%) flagging they’re unsure how they’d get reimbursed for electricity costs if they charged their company vehicle at home. As the UK edges closer to 2030, when the ban on the sale of new combustion engine powered vehicles will come into force, cost still remains a concern among van drivers, with the outright cost of new vehicles (16%) being the biggest financial concern.

For businesses, almost one-third (29%) stated that the initial infrastructure cost of introducing electric vans would be too much of a burden for themselves or their business. In fact, recent statistics from the SMMT revealed that commercial vehicles account for 13% of vehicles on the road (4,604,861), yet data from 2021 showed only 0.3% were fully electric or plug in hybrids (source: SMMT, May 2021).

Showcasing the power of the green pound, over a quarter (26%) of van drivers believed their company would be perceived more positively for driving electric vans. Similarly, almost half (48%) believed if their colleagues or friends were to buy an electric vehicle, it would positively impact their work and lifestyle.

Over half (52%), also agreed with the statement that they, or their company, is planning on making the switch to an electric van because they’re “really cool”!

Mandy Dean, Commercial Vehicle Director, Ford of Britain, said: “With the Ford Transit being the best-selling vehicle in the UK, tackling the concerns of Britain’s workforce is an important task in helping the nation go green and make the switch to electric. Understanding people’s perceptions of electric vehicles is vital to making sure we’re all on board, including within the vital commercial vehicle segment which is so important for keeping the UK’s economy growing. Our research report shows while there are concerns about the switch, van drivers seem willing to embark on the journey to go green and Ford Pro has the capabilities to make the switch easier.”

“With concerns around being out pocket a key worry for drivers, we’ve introduced simplified billing and administration via Ford Pro Charging software which means that fleet drivers can charge at home and the energy cost will be exactly calculated and sent to their business for your reimbursement.”

Busting some of the misconceptions around range anxiety and reducing vehicle down time, the newly introduced Ford Pro software, available on E-Transit and E-Transit Custom to come, has a host of new features to help support van drivers: 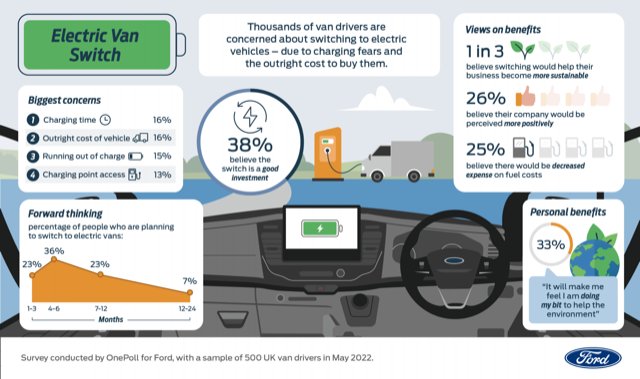