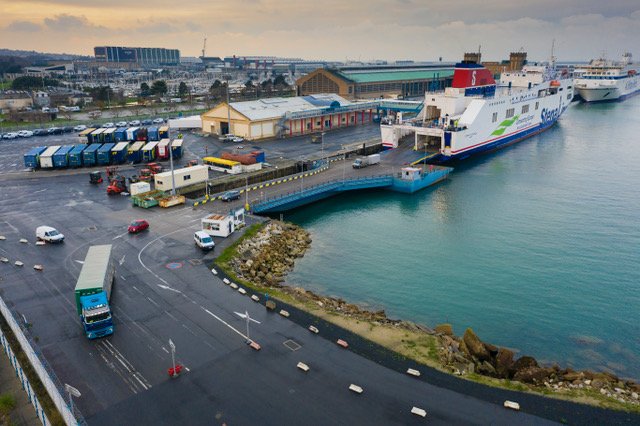 Stena Line has announced that it will double capacity and frequency on Its long established Rosslare/Cherbourg service by introducing the Freight vessel Stena Foreteller to the route from 4th January 2021, writes Howard Knott, Fleet Maritime correspondent.

From that date the Ro-pax Stena Horizon will maintain its normal schedule with afternoon departures on Tuesdays, Thursdays and Saturdays while the additional vessel will sail from Rosslare on Monday, Wednesday and Friday afternoons. The six sailing a week schedule means that there will not be sailings ex-Rosslare on Sunday nor a return sailing from Cherbourg on Monday.

Commenting Niclas Mårtensson, CEO Stena Line said: “We have been listening carefully to feedback from our customers and it has become clear that there is demand for increased frequency on the Rosslare-Cherbourg service, the shortest direct crossing between Ireland and France.”

“One of Stena Line’s key strengths is our ability to utilise our fleet and be flexible and responsive to market opportunities and changes.  On the Irish Sea, we are very well positioned to cover the requirements of the freight and logistics sector with a choice of six routes serving Britain and Europe via Landbridge or our direct crossings to France.”

“Now with 12 weekly crossings connecting Rosslare and Cherbourg and up to 240 sailings per week throughout the Irish Sea region, we offer transport organisations and their customers the flexibility, availability and reliability required to get their goods to market in the most convenient way.”

Following the Stena announcement a spokesman for the Port of Cherbourg said: “To follow this increase in the maritime offer, Ports of Normandy (owners of Cherbourg Port) is working on other development on the port; a rail terminal that makes it possible to offer a wider hinterland to users of cross channel services, and a new land offer dedicated to the establishment of logistics warehouses is currently under development”.

The Stena announcement of their decision to deploy the Stena Foreteller onto the Rosslare/Cherbourg route comes just a week after the announcement by DFDS Ferries that they will start a six-times a week Rosslare/Dunkirk service also in the first week in January. From March Brittany Ferries will add a once a week Rosslare-Cherbourg rotation to their current twice weekly Rosslare/Bilbao service operated by the Connemara. This vessel will sail from Rosslare on Monday evening.

The Stena Foreteller is owned by Stena Ro-Ro and in Spring 2020 was chartered to Irish Ferries, operating on Dublin/Holyhead route. A sistership, Stena Forecaster currently operates for P&O Ferries on their Dublin/Liverpool service.

Meanwhile, DFDS has announced details of two of the three vessels that it will deploy on the Rosslare/Dunkirk route from January 2nd. These are the Ro-Pax Kerry, until recently on charter by owner, Stena RoRo to Brittany Ferries and operating the Rosslare/Bilbao route, and Visby, a cruise ferry presently in service in the Baltic. Visby will be re-named, Visborg in 2021 has freight capacity of 1600 lane metres and sleeping accommodation for 300.

It will be interesting to see how long will the new vessel remain on the route, given the mix of driver accompanied and unaccompanied trailers on the route as well as passenger vehicles, particularly as Covid-19 recedes, a sistership to the Stena Horizon would seem to be much more appropriate. That would also allow them to operate a seven services a week in each direction.