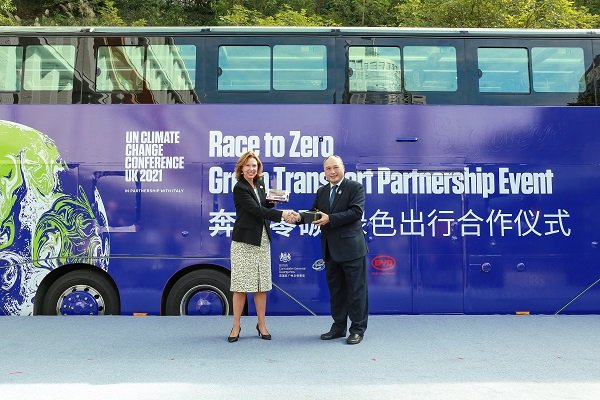 The event was arranged to kick-off both companies’ commitment to the Race to Zero campaign, an initiative forming a central theme in the run-up to next year’s COP26 – the UN Climate Change Conference in Glasgow in November, 2021. The Race to Zero is a global collaboration for businesses, cities and other stakeholders to join forces in their quest to reduce carbon emissions.

Attending the event as guest of honour from the UK Government was the Ambassador to China, Caroline Wilson CMG. The UK is spearheading a Zero Emission Vehicle (ZEV) initiative, one of five campaign themes tackling climate change under the UK’s Presidency of COP26. Also attending the media event is BYD Europe’s Managing Director, Isbrand Ho. All participants pledged their firm support for the Race to Zero initiative, with IsbrandHo describing BYD’s industry-leading New Energy Vehicle credentials on the global e mobility stage.

Commenting from the event, Ambassador Wilson said: “This day marks another step on the shared UK-China path towards an ambitious and successful COP26 next year. It is very exciting to see the commitment of both Shenzhen Bus Group and BYD to the UN’s Race to Zero campaign, which reflects both partners’ commitment to a path towards zero emissions. We are working with governments, businesses, vehicle manufacturers and civil society to realise this transformation and it is in this context that the commitments made by Shenzhen Bus Group and BYD are so important, showing all of us the way forward.”

During his presentation, Isbrand Ho said: “Alongside our UK-China Green Transport Partnership colleagues, we stand ready and committed to reducing the impact of transport on our environment. In fact, we have continuously honoured this commitment for 25 years. We are proud of our tireless work in developing new technologies, and to make our zero-emissions goal a reality.”

BYD (Build Your Dreams) is a significant international brand with nearly 900,000 new energy vehicles sold to date. The Chinese company’s performance on the global stage includes a presence in more than 300 cities in over 50 countries, including over 60,000 e buses in service. In the UK, BYD has partnered leading bus-builder Alexander Dennis Ltd., which has produced 400 BYD ADL e buses operating in more than 10 major UK cities, collectively clocking-up 16-million pure-electric, zero-emissions kilometres and reducing CO2 output by 17,000 tonnes.

Jarlath
The Small Firms Association (SFA) is recommending that small business-owners review their financial positions, as Covid disruption and temporary closers continue and in advance...

Some guidance from the Health & Safety Authority for employees working...