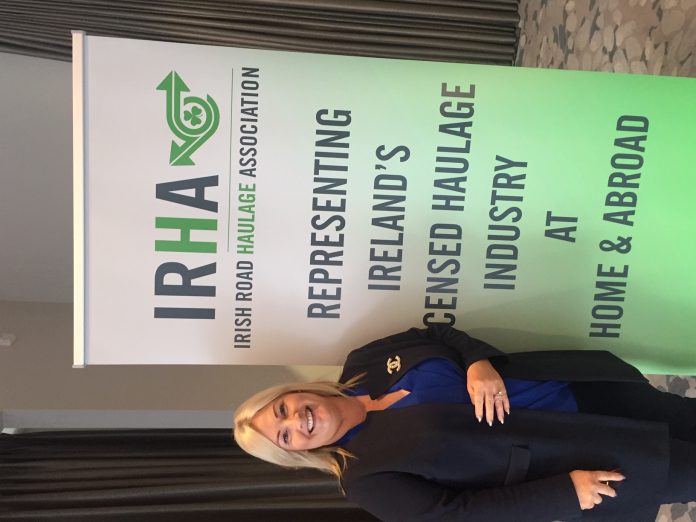 The President of the Irish Road Haulage Association (IRHA), Verona Murphy has called on industry bodies and political commentators to exercise high levels of sensitivity in their public comments on Brexit in the coming weeks. In particular the IRHA President said that any alarmist or incendiary remarks will be seized by those that are driving for a hard Brexit in the UK and played back against Ireland and our preparations.

“There has been a substantial amount of work carried out to prepare for a range of eventualities on Brexit, including a No Deal Brexit. The IRHA, along with national retailers, exporters and agencies have been involved in a range of discussions with Government Departments and agencies to ensure that all possible contingency measures are in place to deal with Brexit.”

“It is vitally important that we concentrate on the finalisation of our preparations in a focused, clear and determined manner. It is also important that commentators, whether from the political or business sectors do not give succour to those within the British Government who are intent on trying to create havoc and disruption through their determination to crash out of the EU without a deal. We can be demanding and exacting of the Government agencies to ensure that they are adequately prepared for Brexit without feeding the chaos lust of the hard Brexiteers in Westminster.”

Ms. Murphy commented that the IRHA, as an organisation set up to represent Irish hauliers will play a constructive part in helping to support our Brexit preparation through engaging in constructive and tough dialogue with Government. She also called for responsible commentary from other business organisations, especially Irish affiliates of UK organisations. “This is a time for national unity and clear focus. Government needs to deliver to support businesses and consumers on Brexit preparation. But it needs to do so in an environment without alarmist predictions and scaremongering”