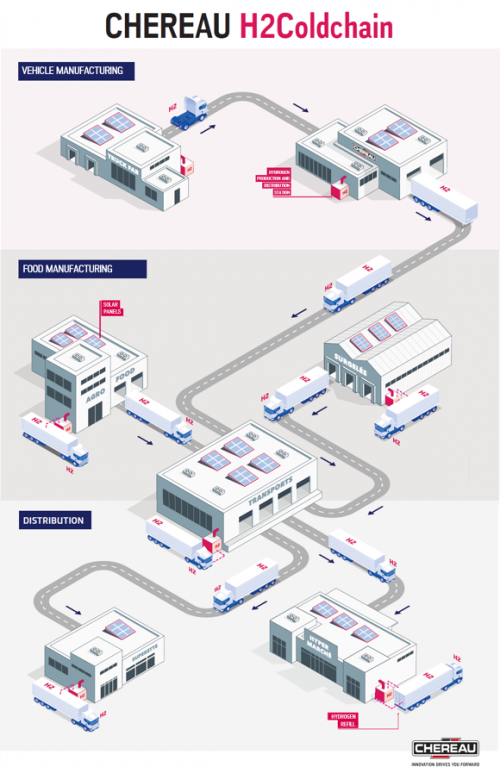 French refrigeration trailer builder CHEREAU is firmly believing in hydrogen as a clean energy source for the future, but also today. This is why this technology has been implemented and tested on the ROAD concept and through the “FROM ROAD TO REAL” program we are actively preparing its industrialisation with the new CHEREAU Hydrogen Power H2 range.

CHEREAU is a member of AFHYPAC (French Association for Hydrogen and Fuel Cells) and is involved in various projects to set up the sector (H2 Corridor and Ethyr CoManche).
“We not only offer new hydrogen vehicles for our customers, but also support projects to set up hydrogen stations in the territory. H2Coldchain aims at transforming the largely diesel-based cold logistics chain into a fully decarbonated chain using green hydrogen,” stated Christophe DANTON, Marketing & Communication Director.

As illustrated in the diagram attached, the aim is to provide transporters with hydrogen refrigerated semi-trailers and, as soon as possible, their tractor-units, as well as hydrogen production and refilling points.

Indeed, to compensate for the absence of a station and the limited autonomy of the first hydrogen trucks and to guarantee a maximum decarbonated hydrogen, H2Coldchain proposes to integrate a production and distribution station on each industrial site of the cold logistics chain. Thanks to photovoltaic panels on roofs or shades, an electrolyser and a storage tank, it is possible to produce green hydrogen locally.

Under these conditions, the production of green hydrogen thanks to the available surface areas on the various industrial buildings of the identified project players and partners (manufacturers of agri-food products, transporters, distributors, tractor and semi-trailer manufacturers) makes it possible to overcome the short- and medium-term limitations of the network of consumer recharging stations in operation or planned to date, and to accelerate the implementation and growth of the industrial project for the production and sale of semi-trailers and refrigerated trucks powered by hydrogen energy.

This project therefore aims both to industrialize the hydrogen systems embedded in a refrigerated semi-trailer and to deal with all the above-mentioned brakes or blocking points. It meets the urgent need to decarbonize and depollute transport and cold chain energy using hydrogen energy, but also has an industrial challenge, both for the project leaders and for accelerating the development of the French hydrogen industry.

Commenting on the innovation Damien Destremau, President of The Reefer Group & CHEREAU: “We are already engaged in the energy transition. It is embedded in our corporate values and our actions: hydrogen-powered refrigerated semi-trailer, a world premiere; support for Energy Observer; commitment to a neutral energy balance at our Ducey site in 2025… But this is not enough. We still need to accelerate and federate, because if we want the world to change, more of us need to get involved. In mid-April, in response to the call for expressions of interest issued by the French government, we proposed a hydrogen cold chain logistics project called H2Coldchain. This project has received many letters of support. So, I am also launching an appeal: food and pharmaceutical manufacturers, temperature-controlled transporters, distributors, join us! Let’s totally decarbonize our industry by 2030, it’s possible, the technologies are ready.”