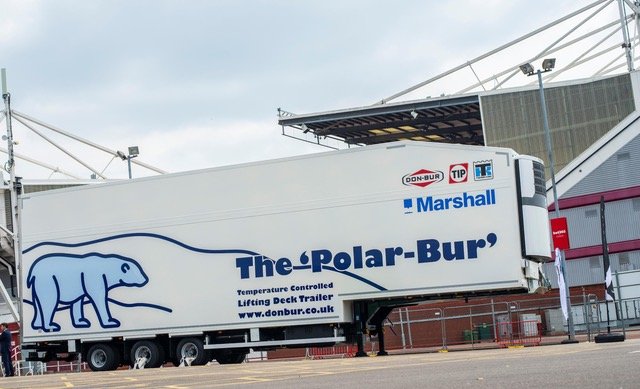 Featuring one of the latest award-winning Thermo King Advancer A500 refrigeration systems, the Polar-Bur trailer on display was the first of two of these brand new trailer designs that are being supplied by TIP Trailer Services to its customers. Alongside the debutant Polar-Bur trailer, were two other Don-Bur trailers including a 13.7 m teardrop curtainsider and a 13.6m fixed deck box trailer. Also on display at the TIP Open Day were a selection of new trailer designs from other long-term trailer suppliers to TIP, including two trailers from Irish manufacturers SDC and a concept longer length Link trailer from Dennison Trailers, designed specifically for the UK market.

Completing the TIP Open Day lineup were two electric vehicles, at 3.1 tonne and 16 tonne, from Renault’s ZE electric distribution range that are currently available for hire or lease through TIP company GrayRentals, as well as one of the latest fully kitted out mobile service units that form part of TIP’s 100 strong fleet of support vehicles around the UK.

“Being able to host the launch of the first temperature-controlled lifting deck trailer from Don-Bur was a significant coup for us and reflects the long-term relationship that we have with the trailer manufacturer. Looking at the comprehensive display of both trailers and vehicles from all the manufacturers exhibiting at the Bet365 Stadium, meant that the visitors to our open days were treated to an excellent selection of trailers that showcased some of the latest industry technology,” said Mike Furnival, Managing Director UK&Irl, TIP Trailer Services.

Ideal for single temperature frozen applications, Don-Bur’s brand new Polar-Bur trailer has been designed to operate between +12 and -20°C, effectively an ATP Class C specification. The first Polar-Bur trailer that was on display at the TIP open day, was fitted with the latest Thermo King Advancer A500 refrigeration system.

The 4.915 m high, tri-axle trailer was also fitted with an aerodynamic ‘EcoStream’ roof profile, which is claimed to reduce fuel consumption by between 10 and 16% depending on the route and environmental conditions. Don-Bur also estimates that when covering 80,000 miles per annum, the streamline roof of the Polar-Bur trailer also lowers CO2 output by an estimated 13 to 16 tonnes per annum.

“With Don-Bur’s tried and tested expertise in lifting decks over the last 30 years, their Polar-Bur reefer trailer is a natural progression which allows TIP to offer its customers even further technologically advanced options with regards to the supply of high quality temperature-controlled trailers. It also goes some way to addressing the current general lack of available manufacturing capacity in the temperature-controlled marketplace,” commented Mike Furnival.