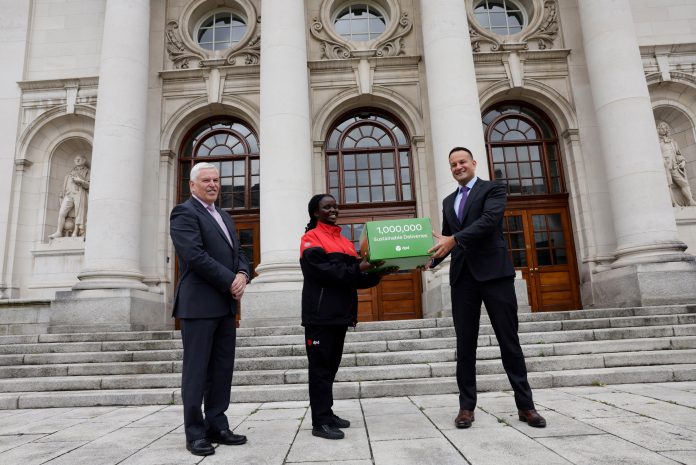 DPD Ireland has reached the milestone of 1 million sustainable deliveries, with the millionth parcel delivered to An Tánaiste and Minister for Enterprise, Trade and Employment, Leo Varadkar.

The parcel-delivery company is currently delivering more than 4,000 parcels per day by electric vehicle and estimates to have saved 72.65 tons of CO2 emissions in 2021.

The company has also begun testing the use of hydrotreated vegetable oil (HVO) instead of diesel on its line-haul fleet, in a bid to further reduce emissions. The use of HVO fuel, which is a completely renewable diesel alternative based on waste grease and vegetable oils, offers a 90% reduction in greenhouse gas emissions per trip.

DPD Ireland last year announced it was investing a further €2 million decarbonising its Irish fleet, with the addition of 100 new electric vehicles by the end of 2022. The company has already invested €3.2 million since 2019 in electric vans and infrastructure.

The company aims to electrify 25% of its total fleet by 2025, which means having 400 electric vehicles on the road in just 3 years.

It currently has 51 electric vehicles on the road in Ireland, and has ordered a further 110 electric vans, the largest order reported by FORD Ireland this year. The first batch are due to arrive in the Autumn, bringing the total number of electric vehicles used by DPD Ireland to over 100 by the end of this year.

The new electric vehicles are Ford E-Transits which will provide more range and cubic capacity than any electric van to date.

An Tánaiste and Minister for Enterprise, Trade and Employment Mr. Varadkar said, “We must do what we can to leave our planet in a better condition than we inherited it. Enterprise has a really important role to play and it’s great to see DPD Ireland take the lead, investing over €5m to make the business more sustainable. Congratulations to the team on reaching 1 million deliveries by electric vehicle. It’s is a really significant milestone and it was great to be the lucky recipient of the 1 millionth parcel! I know the company is only getting started and is doing a lot more to reduce its reliance on fossil fuels. The very best of luck to the team with their plans.”

DPD Ireland sustainability manager James Atkinson said the delivery firm places huge emphasis on sustainability and is determined to decarbonise its fleet by 2030.

“As well as lowering emissions on journeys, we are heavily focussed on reducing journeys in the first place. Our flagship route optimisation project will enable depots to deliver more parcels with the same number of vans, meaning no additional emissions, while growing the business,” he said.

Mr. Atkinson said the challenge with electric vans is its range. The company expects the Ford E Transit to do 250km on a single charge, adding that 20-25% of DPD Ireland delivery routes are over 200km.

“These hard-to-electrify routes will be supplied with a biofuel, HVO, which offers up to 90% emissions reduction versus diesel. We have already purchased our first tank of HVO and are currently trialling it on line haul trucks between Dublin and our central sortation facility in Athlone.”