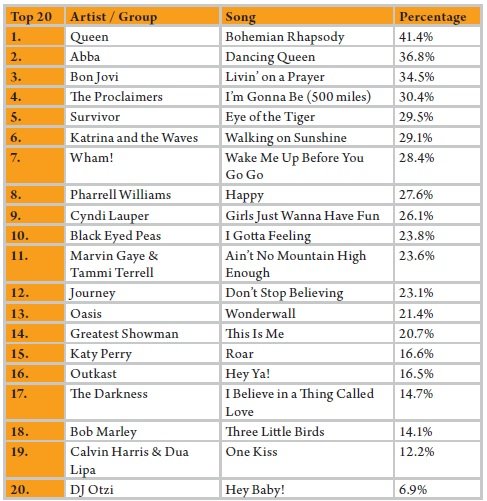 Recent research has found that 90% of drivers say music makes them feel happy, and that the classic hits are very much firm favourites, featuring heavily in top-20 song lists to make you feel good while driving.

Alongside Queen’s Bohemian Rhapsody coming out on top, a further seven of the top-10 songs were originally recorded in the 1970s or 1980s with drivers stating they’d rather listen to the likes of ABBA and Marvin Gaye to boost their mood in the car.

Bon Jovi’s Livin’on a Prayer and Eye of the Tiger by Survivor also provided more of a mood-boost for drivers than modern day hits. However, Pharrell Williams’s Happy and I Gott a Feeling by the Black Eyed Peas were the only songs to feature in the top 10 from the new millennium.

With a preference for a throwback playlist while driving, more than 84% of the 2,000 18-84-year olds surveyed said they often or always listen to music in their vehicle. Listening to music releases the feel good hormone dopamine according to scientists, increasing by up to 9% when listening to an enjoyable track.

Pop and rock music were considered to be the best genres of music to listen to while on the move, with almost three quarters (64%) of respondents saying that listening to different types of music while driving changes their mood.