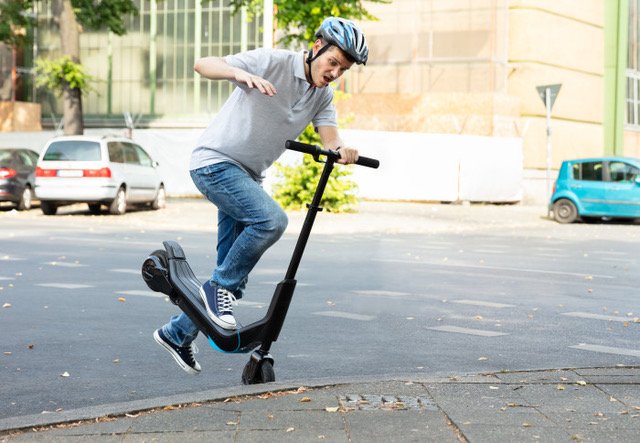 Though more real-world accident data is needed to quantify risk on a larger scale, the simulations provide early-stage evidence that could help sharpen safety regulations regarding speed limits, helmet and wheel design, and pothole management.

Lead author of the study Dr Mazdak Ghajari from Imperial’s Dyson School of Design Engineering said: “Our findings could add to the evidence governments need to make astute decisions on e-scooter safety, which we hope will reduce the likelihood of head, brain, and facial injuries.”

E-scooters are the fastest growing mode of micro-mobility and come with environmental benefits. However, there are serious concerns about injuries caused by e-scooter accidents, and countries around the world have differing views on appropriate speed limits and levels of head protection. Around four percent of e-scooter riders wear helmets, compared with 50 percent of cyclists – and the relationship between e-scooter falls and their speed and design, road surface conditions like potholes, and wearing helmets, is poorly understood. Using privately owned e-scooters is banned on public roads and pavements in the UK, although several rental schemes are operating in various cities.

The researchers simulated the unhelmeted models riding an e-scooter with 10in wheels at five different speeds over 12 differently sized potholes.

They found that even at lower speeds, the speed of impact between riders’ heads and the ground was comparable to the speed used to test bicycle helmets. Reducing e-scooter speeds from 30 km/h to 20 km/h led to a 14 per cent reduction in this impact speed and a 12 per cent reduction in the impact force, but falls at all speeds reached the threshold for skull fracture.

Although impact speeds echoed those from bicycle falls, the angles of heads at impact differed, highlighting the need for e-scooter specific helmet testing methods. Fifty-six per cent of the impacts were to the forehead and rest of the skull, and 44 per cent were to the face, indicating that open-face helmets like bicycle helmets could help prevent a slight majority of head and brain injuries but would not protect against facial ones.

While bicycle and motorcycle helmets are heavily researched and regulated, research for developing e-scooter helmet standards has yet to catch up. Dr Ghajari said: “Unlike bicycle and motorbike helmets, we don’t yet have a gold standard for e-scooter helmets. Our research highlights the need for developing methods that are specifically designed to test helmets under impacts sustained by e-scooter riders, accounting for the angle of the head and likelihood of head and face injuries.”

Many e-scooter falls are caused by riders losing balance when striking road surface obstacles like cracks and potholes. The researchers tested the impact of pothole width and depth on impact speed and force on the head during falls.

Deeper potholes increased the likelihood and severity of falls. While potholes 3cm deep caused no falls in the simulations, potholes with depths of 6cm and 9cm caused falls in 75 per cent of cases. The simulations suggest that for scooters with smaller wheels, the depth at which falls happen would likely be smaller.

The findings highlight the need for better pothole management from local authorities if e-scooters are to become commonplace on roads.

Although the findings give early indications of the head and brain injury potential of falls from e-scooters, computational models cannot, for example, put out their arms to break their fall as a human would do.

The authors note that more research is needed, including real-world data, on the biomechanics of falls and the impact on the brain and head. They hope their findings can assist authorities and e-scooter hiring companies to take more informed actions and produce more research on the effect of e-scooter and helmet design, road surface conditions and speed limits on e-scooter falls.

Co-author and PhD researcher Claire Baker at the Dyson School of Design Engineering said: “Our findings highlight the head injury risks of riding e-scooters and uncover a knowledge gap in how to design e-scooters and helmets to prevent falls and severe injury. We hope the results can also help define representative impact test conditions for assessing the performance of helmets used by e-scooter riders to reduce head and brain injuries from e-scooter falls,” Clare Baker concluded.