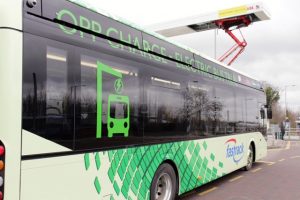 As low-polluting transportation systems gain popularity worldwide, the global electric bus market is segmented into technology, charging technology, product type and geography. Governments and City Authorities from various countries are now emphasizing on no or low-pollution transportation systems to address rising pollution, which in turn drives the electric bus industry. Based on drive system, electric buses are categorized as pure electric, hybrid electric and plug-in hybrid.

The power stored in batteries of hybrid electric buses is used for forceful tasks such as accelerating from standstill. Once the vehicle is in motion, the combustion engine later runs the vehicle’s movement. The kinetic energy of the moving vehicle is used for recharging battery in hybrid vehicles. The hybrid buses hold the majority share in the electric bus industry; however, the demand of pure electric buses is increasing rapidly, especially in the western countries owing to growing government concerns for emission-free transportation.

One of the primary drivers for the electric bus industry is the growing need to reduce dependency on fossil fuels. Charging a battery costs much less than buying diesel to run a vehicle. Electric buses are not only more reliable than convention vehicles but also offer a smooth and comfortable ride. These buses have zero emissions and are more environmentally friendly compared to conventional buses. The ability of these buses to reduce emissions and dependency on fossil fuels will lead to its increased adoption during the forecasted period.

The “autonomous” segment forms the largest segment of the electric bus market and is expected to grow during the forecast period. This category will grow rapidly during the predicted period and will be the most preferred type of charging technology among consumers and manufacturers for the next few years.