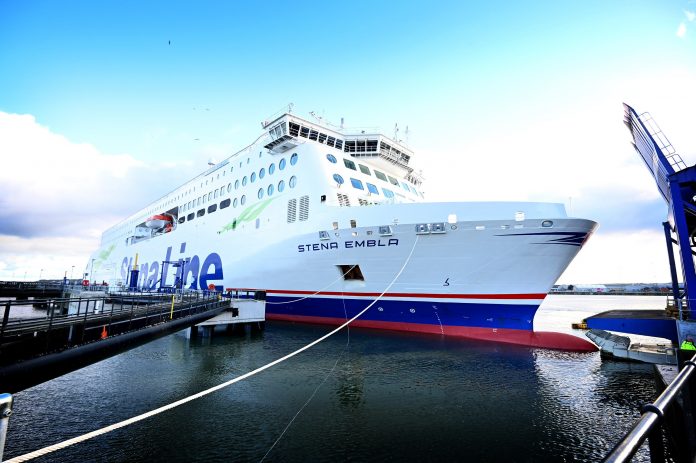 Stena Line’s newest addition to its fleet, the brand-new Stena Embla has arrived in Belfast. Stena Embla is the third E-Flexer ferry to be commissioned for Stena Line’s Irish Sea routes in the last 12 months, three of the most modern ferries in the world.

Stena Embla arrived in Belfast on 2nd January and will complete preparatory works before going into commercial service.  The Stena Embla will join sister vessel Stena Edda, which launched on the route in March 2020 and will replace the Stena Mersey.

Paul Grant, Stena Line’s Irish Sea Trade Director said: “The arrival in Belfast of our newly built Stena Embla is yet another important milestone in the ongoing enhancement programme of our Irish Sea services.  We have now invested over £400m in our ferries and port facilities on the Irish Sea in recent years.  The Belfast-Liverpool route is one of the most popular Irish Sea crossings for both freight and leisure traffic so having a second vessel of the calibre of Stena Embla, with a host of high-quality passenger facilities, will further increase its appeal and expand our capacity.”

“In March 2020 we launched our new build Stena Edda onto the Belfast-Liverpool service and the feedback from our freight and leisure customers was extremely positive. Now we will have two ships offering identical services and facilities which will help take our service levels on the route to new heights.  We have real confidence in the future of our Belfast services and our Irish Sea routes in general, which is why this region has attracted three brand new ships in the last 12 months alone.”

Paul Grant concluded: “Clearly 2020 has been a difficult year for our business, however, despite this Stena Line has remained resolute in our ongoing commitment to driving our freight and travel business forward in the region.”

Stena Embla will make one daily return trip between Belfast and Liverpool.  Stena Line is the largest ferry operator on the Irish Sea, with the biggest fleet offering the widest choice of routes including, combined passenger and freight services from Belfast to Cairnryan and Liverpool, Dublin to Holyhead, and Rosslare to Fishguard routes, as well as a freight only route from Belfast to Heysham, a total of up to 238 weekly sailing options between Britain and Ireland. Stena Line also offers a direct service from Rosslare to Cherbourg with 12 crossings per week.