“According to the latest statistics published by the European Commission last month, EU road fatalities have been reduced by more than half since 2001, from 54,900 just after the turn of the century to 25,260 in 2017. By contrast, the number of passenger cars on Europe’s roads increased from just over 200 million to 259.7 million during the same period.

So, despite the fact that there are nearly 60 million more cars on our roads today, accidents still have gone down significantly. The European Union also has the safest roads in the world, counting 49 fatalities per million inhabitants annually, while the global average is 174 fatalities.

Nevertheless, all major players in the mobility sector agree that road casualties should be further reduced, with the aim of working towards zero traffic fatalities in the future. The EU automotive industry is committed to playing its part, as it invests a large part of the sector’s annual €54 billion R&D budget in making passenger cars and commercial vehicles even safer. Over the past decades, the introduction of passive safety systems – like pre-tensioned seatbelts, airbags and energy-absorbing crumple zones – has made a major contribution to road safety by protecting the occupants of a vehicle and other road users if a crash occurs.

Now, active safety measures offer huge potential to further improve road safety by avoiding emergency situations altogether, or at least by actively helping the driver to manage them properly. Think, for example, of Autonomous Emergency Braking (AEB) systems that automatically intervene if the driver doesn’t react (or not fast enough), as well as technology to ensure that you don’t leave your lane unintentionally, like Lane Departure Warning (LDW). Simply put, active safety systems prevent or mitigate an accident pre-impact – so before it actually happens or contact is made. 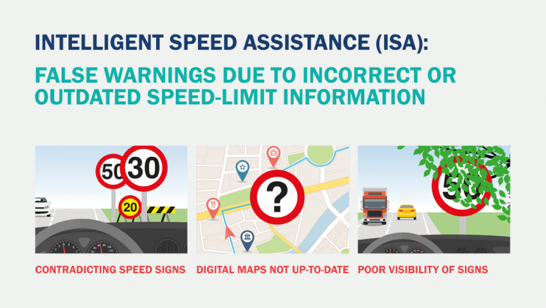 Looking ahead, it is clear that active safety should take priority when it comes to directing future investments or drawing up new vehicle safety requirements. Simply because it can deliver greater benefits and avoid accidents completely, rather than ‘only’ mitigating the effects of a crash.

In order to identify appropriate future vehicle safety systems, in-depth accident research needs to be conducted to enable informed decision making. This is also the case for the European Commission’s proposal to revise the General Safety Regulation (GSR), which is under discussion by the European Parliament and the Council right now. The aim of this GSR revision is to update the EU Regulation that specifies which safety systems new car types should come equipped with.

In this context, it is important that we continue to focus on the most effective solutions. When it comes to addressing accidents caused by excessive speed, for example, the Commission has proposed to equip all new cars with Intelligent Speed Assistance (ISA). This technology can actively prevent drivers from exceeding the speed limit using road-sign recognition cameras and GPS-linked speed limit databases. In practice, however, ISA still shows too many false warnings due to incorrect road signs and outdated information – something that most consumers simply will not accept. Moreover, cameras cannot anticipate all scenarios, for instance when traffic signs are covered up.

Speed Limit Information (SLI) systems are an effective alternative to ISA technology, especially as long as the reliability of the latter is still hampered by infrastructure-related issues. That is why ACEA recommends a step-wise approach for introducing intelligent speed assistance in cars instead of making it mandatory right away. Every euro can only be spent once, so it’s a question of investing in the most effective solutions.

To further assess the potential of the different safety measures under consideration, a detailed analysis of road accident statistics was carried out by the Transport Research Laboratory (TRL) and Centre Européen d’Etudes de Sécurité et d’Analyse des Risques (CEESAR). This accident analysis provides clear guidance on the strengths, weaknesses and effectiveness of the safety measures proposed as part of the GSR revision in terms of how much they can further improve road safety.

Besides the new requirements proposed for passenger cars and vans, the TRL-CEESAR analysis also looks at heavy-duty vehicles. Accidents with trucks involving Vulnerable Road Users (VRUs) such as cyclists and pedestrians are often caused by vision-related factors, for instance, when VRUs are in the blind spot of a truck. Everyone agrees that these accidents should be addressed, but not all proposed measures are as effective as others.

Some argue that the direct field of view of truck drivers should be extended by modifying the entire structure of the vehicle, in order to create low-entry ‘direct vision’ cabs for trucks. This entails mounting the cabin in front of the truck’s engine instead of on top of it, which puts the driver closer to the road but reduces the available loading space, as well as increasing the window surface of the cabin.

However, the TRL-CEESAR accident analysis now shows that active safety measures – using cameras and sensors to increase the driver’s field of vision – are some 50% more effective in reducing fatalities and injuries than extensively re-designing trucks. Moreover, contrary to ‘direct vision’ low-entry cabs, active safety measures will actively draw the attention of the driver to the critical area or the VRUs concerned. Even with the widest possible field of view in a low-entry cabin, a truck driver can only look in one direction at a time and still might fail to notice a pedestrian or cyclist on the other side of the vehicle.

This is just one of the key findings of the analysis, which counts more than 130 pages and underlines the need for EU safety policy to prioritise measures that deliver the most optimal results. In fact, the auto industry supports a wide array of the vehicle safety measures proposed by the European Commission. ACEA members are open to expanding important safety features, such as the requirement that all new car types come equipped with autonomous emergency braking systems or lane departure warning.

At the same time, we also have to recognise that vehicle technology is just one piece of the complex safety puzzle. Human error (such as distraction, poor anticipation and violation of road traffic laws) is the cause of 90% of today’s accidents. This means that we need to combine cutting-edge vehicle technology with improved driver behaviour, better road design and maintenance, and better enforcement of existing traffic regulations.

If we are to make progress on the objective of reducing fatalities and serious injuries to zero in the future, we need put more emphasis on an integrated road safety strategy. Because the only way to reach this goal is by ensuring that safe vehicles are driven by safe drivers on safe roads.”

Fossil-free last mile transport for rail shuttles operating to and from...