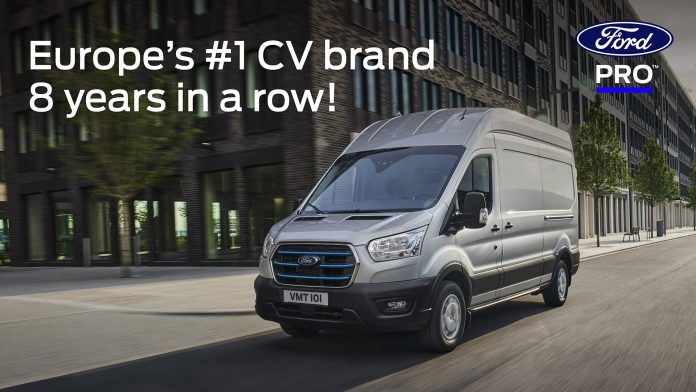 Ford Pro was Europe’s commercial vehicle sales leader in 2022, marking an eighth successive year of market leadership for Ford and a new record in the industry.

“Setting a new record of eight consecutive years of European market leadership demonstrates how much our commercial customers rely on Ford’s vans and pickups to deliver for their business. As we roll out our unique platform of software, charging and services across Europe, we are determined to ensure Ford Pro remains our customers’ trusted partner for productivity,” said Hans Schep, general manager, Ford Pro, Europe.

As part of a major roll-out of new products and services, Ford Pro launched in the spring of 2022 the all-electric E-Transit van, which from its standing start has led European monthly sales of the two-tonne EV van segment since June last year and attracted over 1,750 UK orders. Ford Pro also unveiled its integrated platform of software, charging, servicing and financing, purpose-built to accelerate the productivity and sustainability of businesses of all sizes across Europe.

In 2022, the company announced the all-new Ford Ranger  pickup, as the product strengthened its segment leadership and marked eight successive years as Europe’s most popular pickup.