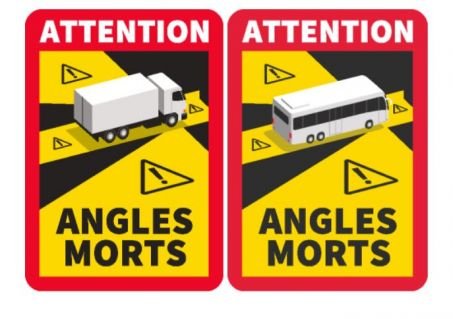 New legislation entered into force in France as from 1 January 2021 which requires Heavy Goods Vehicles whose authorized total weight exceeds 3.5 tonnes to be equipped with warning stickers to signal the position of blind spots to other road users.

This obligation applies to commercial vehicles travelling in an urban environment. Non-compliance with the rule will result in a 4th class penalty fine (€135 – which can be decreased or increased, associated with a loss of 1 to 6 points on the driving licence.) These rules have been implemented to increase the protection of vulnerable road users (pedestrians, cyclists etc.) and to reduce the high number of road accidents in France. The Decree including article R. 313-32-1 on Heavy Good Vehicles, has been published in French only and it is available here.

In order to allow operators to comply with these new rules a 12-month transition period has been agreed (see the FNTR website) during which grace period it will be acceptable to have any visual indication of the presence of blind spots if the official stickers are not available.

Regarding the official stickers, they must be visible on the sides as well as the rear of the vehicle but so far detailed instructions regarding how and where to fix them have not been published.

To conclude, starting from 1 January 2021 trucks operating in France will need to make sure they have either the official stickers or some other devices signalling the presence of blind spots in order to avoid incurring penalties.