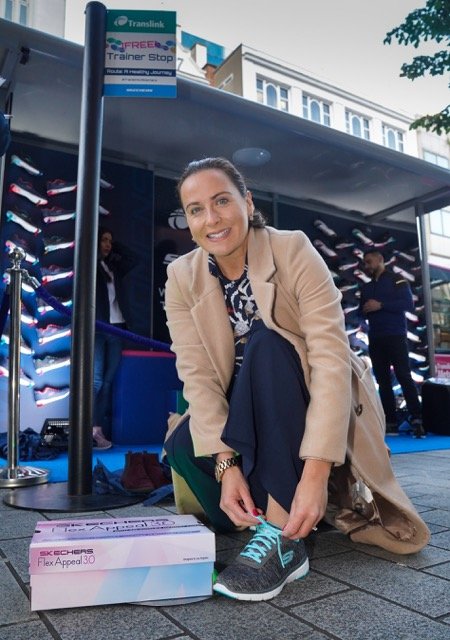 Most people in Northern Ireland do not take enough exercise to prevent ill-health, according to research by the Public Health Agency. Recently in Belfast, Translink and Skechers Ireland acted, by transforming a bus stop along one of the city’s busiest shopping streets, into a pop-up shoe shop where Translink customers could get their hands on a free pair of Skechers.

The aim of the activity is to get people to ‘Step-Up’ and think of their commute as an opportunity to easily clock-up additional steps and burn more calories as they walk to and from the bus or train. In return for their free shoes, the lucky recipients took part in a step challenge at the bus shelter with local professional fitness trainer, Ian Young, motivating unsuspecting passers-by during the morning rush-hour.

Speaking following a fantastic response from passengers, Chris Conway, CEO, Translink said: “Research shows that people who take public transport are more active on a daily basis. With the best will in the world it can be difficult to try to motivate yourself to exercise every day, which is why we are encouraging our customers to see public transport as the smart move to easily build activity into their daily routine. To help them stay on track, each person today has been challenged to record their daily steps for four weeks to be in with the chance to win one month’s free travel with Translink and a year’s supply of free Skechers shoes. This activity is part of an on-going campaign by Translink to raise awareness on the importance of sustainable transport and the associated health benefits, not to mention that public transport is now considered the single greatest way to reduce your carbon footprint.”