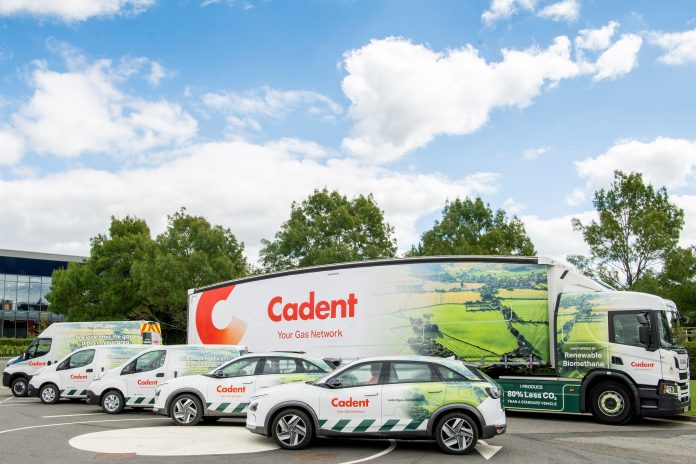 Cadent has embarked on the road to a greener future taking delivery of new zero emission vehicles which will enable gas engineers to respond to emergencies across its London network pollution free.

The new cars are hydrogen fuelled Hyundai’s with a range of almost 400 miles. The cars are environmental rock stars with the only emission their power sources generate being water.

Currently there are no dedicated hydrogen fuel cell electric vans operating in the UK today so Cadent has chosen the Nissan e-NV200 as the platform on which it can develop its early learning and experience as it works towards decarbonising its gas emergency response fleet.

Externally the vehicles have all been liveried in with distinctive eye-catching designs by Stafford based Bri-Stor and the new vans have been fitted out internally with all the equipment FCOs (First Call Operatives) need including charging points, laptop holders, hot water washer and gas detection equipment.

The fleet decarbonisation initiative has also seen demonstration vehicles operating in the North West and East of England networks. The new vehicles have been bought as part of Cadent’s commitment to introduce zero-emission First Call Operative (FCO) vehicles and to have 1000 zero emission vehicles across all its networks by 2026. This ambition also provides a unique opportunity to encourage the development and supply of a new product, hydrogen vans into the UK market.

Cadent Fleet Specialist, Dominic Stephens, said: “The new hydrogen fuel cell cars and e-vans are a first for Cadent and represent a major step forward in working to achieving our RIIO 2 environmental goals. In tandem with this we’re also working to develop a range of other transport technologies to reduce our carbon footprint.”

The London network was chosen as the first recipient of the new vehicles because of the availability of charging points and fuelling stations.

James Harrison, Director of the North London network commented: “ It’s a really exciting time to introduce these vehicles to our fleet as the required infrastructure is growing and developing rapidly. These vehicles will allow us to gain valuable feedback which will be used to determine our pathway to reducing the emissions of our fleet”

Cadent Sustainable Transport Manager David Jones said: “The acquisition of these new vehicles shows that Cadent walks the talk in regard to both the environment and the future role of gas transport.

“By investing in hydrogen vehicles we’re not only being good stewards of the environment but we’re also demonstrating the viability of gas as a future fuel source for transport which is entirely consistent with our own hydrogen strategy.”

For movement of large items Cadent has also invested in a joint fleet of nine biomethane trucks with logistics company DHL. These vehicles will significantly reduce greenhouse gas emissions and help improve air quality. The trucks are also cheaper to run, generating savings of around 38 per cent compared to diesel.

The pros and cons of the new vehicle types will be assessed with issues such as range and the ability to operate equipment being looked at as Cadent looks to acquire more zero emission vehicles, with all options being considered, as it works towards its 2026 goals.

HAZEL Webinar #4 – Hydrogen Application and Use

Jarlath
Recognizing the critical need for reliable temperature-controlled airfreight solutions for safe transportation of vaccines and pharmaceuticals, Thermo King and Envirotainer has announced that they...