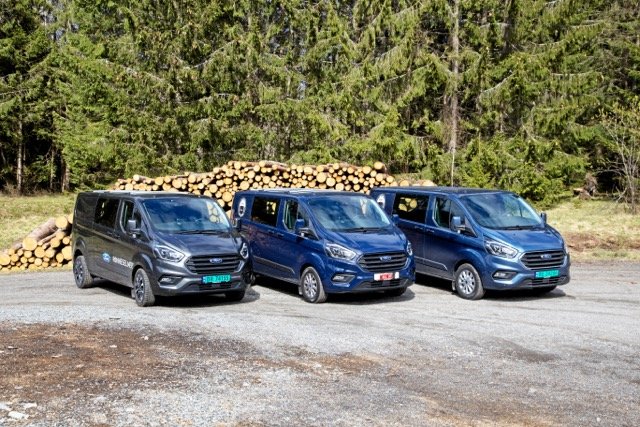 Which of the Ford Transit Custom variants uses the least fuel around Norway’s Capital Oslo?

While the Ford Transit Custom Hybrids were elected International Van of the Year 2020, it has taken time before the first versions became available with Norwegian registration plates, reports Torbjørn Eriksen, from Anlegg & Transport magazine. “When they did arrive, we were therefore very excited to find out how the various drivelines would coupe in our 200 kilometre test route around Oslo. Starting and stopping at the same place, part of the journey takes in a major hilly section, ascending between 2,500 and 3,000 metres. On this occasion, we focused purely on the differences between the vehicle’s drivelines, first and foremost the hybrid technology.”

The two newly developed Ford Transit Hybrids – the EcoBoost PHEV (Plug-in Hybrid Electric Vehicle) and the EcoBlue Mild Hybrid (mHEV) were both the short wheelbase L1 variants, with the new 2.0 EcoBlue diesel being the longer L2. All the vans was driven in the round with a similar 600 kg payload. 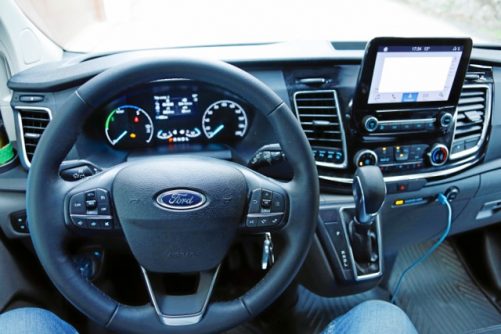 Ford’s PHEV (Plug-in Hybrid Electric Vehicle) driveline is basically an electric motor with a 1-litre EcoBoost petrol engine that has the sole purpose of producing electricity. It also means that the road to a fully electric version could be short, so as an interim low/zero emission alternative, let’s see what Ford will be offering in the future.

Starting with a fully charged battery and full fuel tank, the first kilometres were driven on the highway up to 90 km/h. Under these circumstances the energy in the battery is quickly consumed and we realize that it must be saved before we go up the first long climbs up to Gjelleråsen, an industrial area north of Oslo. At the summit, the battery was completely empty, thankfully from there it is all downhill towards the Ring Road 3, and the battery recharged up to 7 kilometres in range. As that wasn’t even close to take us up the steep hills past Holmenkollen and further up to the Tryvann tower (which is 520 meters above sea level), we therefore took the opportunity to use the Charge Now mode along the relatively flat section. Along the assents and descents, we managed to accumulate 9-kilometre on the battery range. (Holmenkollen is the famous ski jump that can be seen from most of Oslo. Also the main stadium for cross-country and biathlon competitions.)

Again, the Auto mode was selected to start the climb. The battery managed to sustain the electric motors along the 4 km up to Holmenkollen. Then, the motor needed power directly from the petrol engine. It was strange to hear the rpms from the small 1.0 litre EcoBoost engine pitch high as it has to work hard to produce enough electric power for the motor. As a result, the average fuel consumption kept ticking up from 5.2 to 5.3 L/100 km and above.

On coming down again the full Charging mode was engaged in the hope that it might be able to generate enough electricity to tackle Sollihøgda, which is the next peak on the route. Here the seven kilometre long climb east elevates up to 340 meters above sea level. On the descent, the regeneration produced 11 kilometres of range and after driving the motorway from Vækerø to Sandvika in EV-Later mode. This was enough power until near 300-400 metres left towards the peak. After passing the peak, Charging mode was selected for the way down to Holveien. Then the old E16 beyond Utøya was passed towards  a new passage to Sollihøgda. By this time the electricity was spent a few kilometres before the peak.  Again, as the petrol engine cut in, we imagined that the block almost wanted to jump through the bonnet to help with enough power to get us over the top. Utøya is owned by the Workers’ Youth League (AUF), a youth group associated with the Labour Party, which holds an annual summer camp there. Its location is unfortunately remembered, when in July 2011, the then 32 year old  Anders Berhring Breivik killed 69 of the 650 young people that resided there while on camp.

As before, the long downhill sections allowed to regain some energy in the battery packs before rolling down to 134 meters below sea level into the 7-kilometer-long Oslofjord tunnel. That stretch from Sandvika to the tunnel was undertaken in EV-Later mode. Then, on seeing the light at the end of the tunnel, we use the Charging mode in order to get the battery charged as much as possible, especially as the return to the starting point which is 150 meters above sea level. But first, the three kilometre long climb inside the tunnel to get back to above sea level had to be recorded. It is steep with up to seven percent rise and therefore requires a lot of energy. The Oslofjord tunnel, when opened in 2000 it made it possible to cross the Oslo-fjord without passing through Oslo city-centre. With its 7% climb it is one of the least steep of the 36 undersea tunnels in Norway but well above the new EU-regulation of maximum 5% ascent.

Upon returning to base and having topped up the tank and charging the batteries, the overall cost per km, with 600 kg load, was calculated exactly at one Norwegian krone (0.90 euro). We left with a definite impression that this regular test route is not optimal for this driveline. Therefore, we repeated the drive in an alternative 200 km long route on more flatter urban roads with up to 60 km/ h speed limits except for a few short 70 km/h zones, and proved much more efficient. 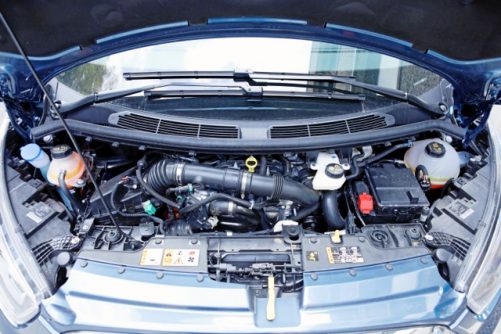 The alternative journey began from Kolbotn and on into Oslo with some tours around the city centre. (Kolbotn, the world’s best place to live, and the location of our office. Located as a neighbour community on the south east side of Oslo). It was driven in Auto mode and achieved an electric range of 42.8 kilometres at an average speed of 24 km/h. At it came towards the end of the ‘battery life’, we had a climb to encounter, where three kilometres of range was eaten up in just a few hundred meters. Hence, on this slightly smoother route, the 45-kilometer electric range would be achievable and adequate during a day’s city driving.

Then the trip continued on to Oslo East and South before heading to Follo (southeast of Oslo along the Oslo-fjord) and towards the Østfold county with no motorway driving. Østfold County, South of Follo, on the east side of Oslo, stretching all the way to the Swedish boarder.  Here, the average consumption slowly and steadily increased since there was no electricity left in the battery. On a few occasions on the downhill slopes, we saved the energy in EV-Later mode. After 100 kilometres, the fuel gauge showed an average consumption of 0.46 L/100 km. (The fuel needle showed a 10% +/- variation, therefore real consumption is about 0.41 L/100 km) at an average speed of 30 km/h.

After this trip, it ended up with an average speed of 38 km/h, and an average fuel consumption of 0.58 L/100 km. In addition almost 12 kWh of electricity was consumed. This gave us a kilometre price of NOK 0.945.

This system uses a torque converter that provides power from the 48 Volt battery placed under the passenger seat. The extra power is applied between the engine and the gearbox. Energy is stored in the battery during braking and deceleration. The starter and alternator has been replaced with a belt-driven ‘generator’. The driver does not notice any particular difference between this system and a pure diesel driven van. Unfortunately, the vehicle tested only had a few kms on the clock, when picked up. This means that the consumption is probably somewhat higher than normal, and from previous tests, we have experienced that the engines tend to reduce consumption by between 10 and 15 percent after it has been broken-in.

On ascending towards Tryvann, there was a sudden increase in average consumption. We wondered what happened. Was the energy in the battery running out? We therefore repeated the exercise one evening later, and got another, much lower fuel usage figure up this demanding climb. We assumed that it was the van’s electronics that had played tricks on us, and in any case, it is our physical filling is what the fuel measurements are based on.

The engine differs from the pure diesel engine in the way that it likes to run at slightly higher revs and thrives best at above 1,250 rpm. In the higher gears, the speed should approach 1,500 rpm towards a hill, to keep up the torque.

After the test run a NOK 1,017 (0.9185 euro) per kilometre was ascertained. While this figure was the highest in the test, if we deduct 10 per cent for ‘fresh engine’, it would have gone from the most expensive to the most affordable in consumption. 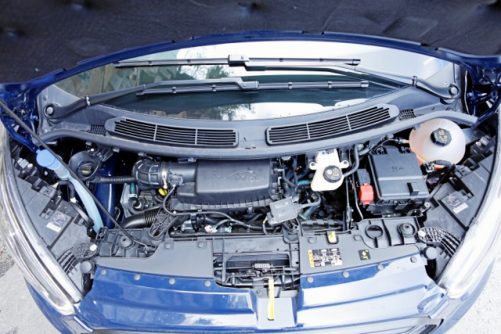 Unsurprisingly, the “good-old” diesel engine became the most affordable in the overall consumption contest. This new 2.0 litre EcoBlue 130 hp version was good to drive providing plenty of power and can be driven down to 1,000 rpm in top gear in flat terrain and pulls off quite well from 1,250 rpm up the climbs.

With the highest towing capacity at 2,800 kg, compared to the 48V hybrid at 2,500 kg, this is also preferable if towing heavy loads.

The stated NEDC consumption for this van during combined driving is 6.5 L /100 km and this test drive returned 6.4 L/ 100 km. This resulted in NOK 0.918 per kilometre costing (0.83 euro), which is not bad considering that there was 600 kg cargo on board. It should also be noted that the tested panel van was a L2 edition has a slightly higher unladen weight than the L1 version. 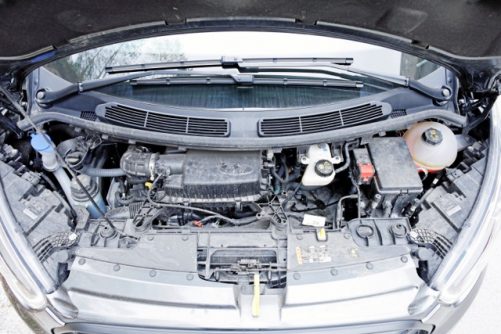 What would we choose?

It depends on the driving style, operation and application. If undertaking long distance driving each day, we would probably go for the EcoBlue 48V Mild hybrid (mHEV). This is cheaper to purchase in Norway than a pure diesel version and we assume that the consumption will be about identical to the diesel after the engines is broken in. If driving mainly in urban traffic and up to an average 100 kilometres during a working day, the PHEV will be good for environmental reasons. On the other hand, when it comes to the economy, with the same 100 km daily driving distance, it will take approximately 10 years before the return on the investment. The PHEV is far more expensive to buy than a Mild-hybrid version in Norway. 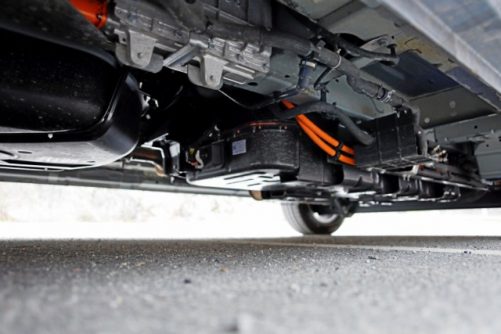 Buying a van today has at least two sides. First and foremost, the total cost of ownership applies, but the environmental footprint that the vehicle leaves behind is becoming more and more important for many customers. How much is it worth to reduce emissions? Will we have driving restrictions for commercial vehicles with internal combustion engines in urban areas? If so, will Plug-in hybrids with geo-fencing be allowed to run under same conditions as EVs? Will there be relief in tolls for low-emission vans? This is some of the many questions that should be considered when determining your choice in van. 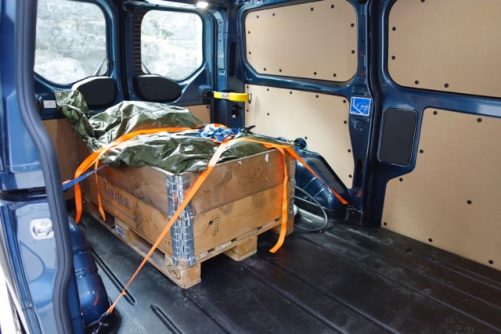 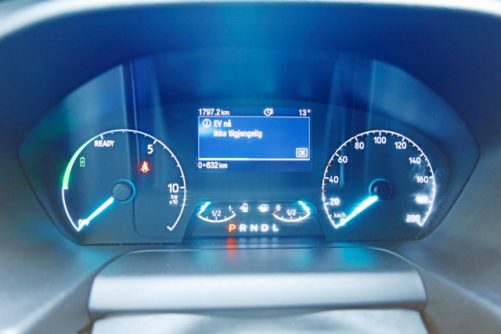