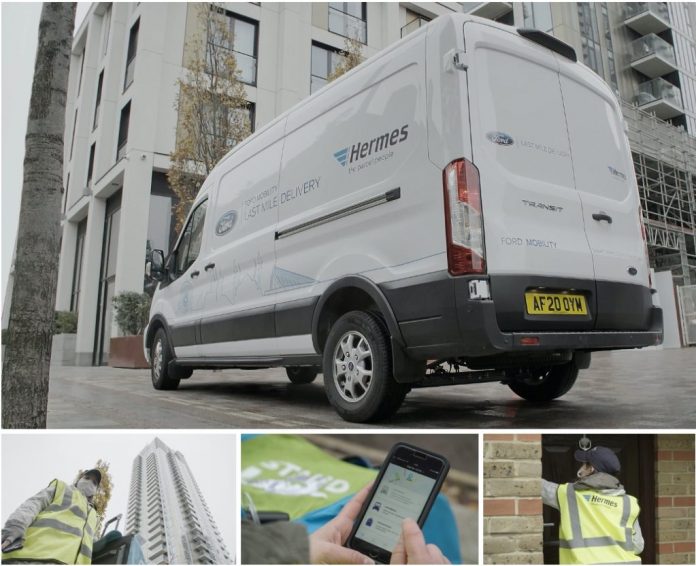 The trial involves delivery vans bringing full vehicle loads of parcels into the Capital where unique software identifies suitable, safe locations for the drivers to park. Each van is met there by a number of couriers who unload parcels onto trollies and then deliver them to nearby delivery addresses. The vans then return to collect the next load from the depot. The initiative is designed to reduce the number of vans on the road and in doing so help tackle air pollution and ease congestion and was developed in a collaboration between Ford and the Hermes Innovation Lab.

During the trial, parcels were delivered more quickly than when one courier drove to each address. In fact, the team of eight pedestrian couriers and two vans delivered the same number of parcels as six vans making conventional doorstep deliveries. The couriers employed in the trial also came from hospitality roles in the capital who were unable to work due to lockdown. Initially focussed on three postcodes in Central London, Ford and Hermes will now explore extending the pilot to further across the UK.

Ford’s intelligent logistics software, identifies safe, convenient locations for the handovers to pedestrian couriers and coordinates those teams as they make deliveries to a mix of high-rise, business and residential buildings. The couriers use a simple smartphone app that advises the location of the van and shows the most efficient routes and itinerary to deliver the parcels. The app integrates with Hermes’ tracking systems to ensure customers have real-time visibility of the status of their deliveries.

Carl Lyon, COO at Hermes UK, said; “We’re exploring new delivery initiatives that can reduce emissions for the final mile delivery as part of our commitment to sustainability and getting ahead of future legislation in cities, such as Ultra Low Emissions Zones. In addition, this operating model is easy to scale up to meet the increasing demand for home delivery and opens up the courier work for a whole new workforce who no longer need to drive or own a vehicle and want to stay active.”

“Being smarter about how we deliver parcels in the future will enable carriers to operate more sustainably and efficiently – while delivering a better experience for customers. Our trials with Hermes have shown how multi-modal deliveries can be scalable and effective, even during peak times of the year,” said Tom Thompson, project lead, Ford Mobility.