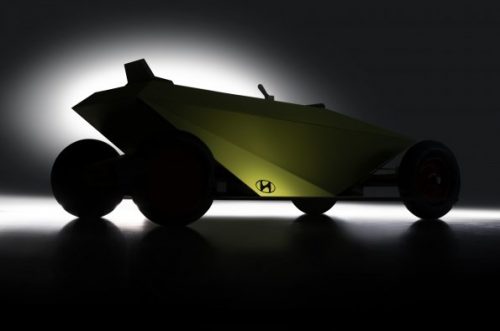 Hyundai Motor has revealed a first glimpse of a new project coming from its European design center, Hyundai Design Center Europe. In a new teaser image, the shape of the soapbox ride can be seen against a dark background. The vehicle is painted yellow, and the Hyundai logo is visible on the side.

The vehicle features a gently-sloping silhouette at a 45-degree angle. Exposed wheels and a low-lying frame give it a dynamic character. The viewer can just make out long, straight lines stretching at an angle across the car’s body – a clear similarity to the concept car 45.

The term “soapbox” refers to a motorless, gravity-propelled vehicle that was traditionally raced by children on a downhill road. Originally made from discarded wooden soap crates, today they boast more modern and sophisticated designs. They are particularly popular in Europe and North America, where many soapbox derbies take place.

More details, including Hyundai’s plans to make a design inspired by the traditional soapbox accessible for customers around Europe, will be revealed soon.