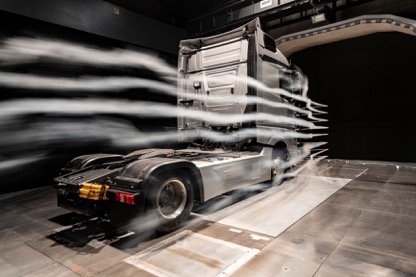 Good aerodynamics in truck cab design is one of the most important aspects in achieving lower fuel consumption. Designers attribute that the significance of aerodynamics can be illustrated by a number: in a modern cab-over-engine truck in European long-distance operations, around one third of the available mechanical energy is needed to overcome the air resistance. And this is also reflected in the new award-winning Mercedes-Benz Actros: the MirrorCam alone, which replaces the traditional rear-view mirrors, contributes as much as 1.5 percent to the overall fuel savings of the new Actros. New concave cab side deflectors on the cab also make a contribution towards lowering the consumption.

A complex system: axial blower for wind speeds of up to 250 km/h

These improvements are due not least to intensive testing in the wind tunnel at Daimler AG’s Untertürkheim plant. There, the engineers simulated the flow conditions around the truck with the aim of optimising the Cd value for wind slip, and thus in turn also the fuel consumption. Especially with regard to the MirrorCam, the tests in the plant provided valuable information. On the one hand for the aerodynamic design of the two camera arms and on the other for the positioning of the camera arms on the right and left-hand sides of the cab. Unlike conventional mirrors, these are fixed to the roof frame in the new Actros.

The wind tunnel in Untertürkheim enables the developers to generate wind speeds of up to 250 kilometres per hour. “Here, in parallel to computer-based flow calculations – i.e. digital simulations using computational fluid dynamics (CFD) – random spot-checks were carried out to confirm the aerodynamic improvement of conceptual components,” stated Michael Hilgers, Head of CAE Vehicle Functions in Commercial Vehicle Development at Mercedes-Benz, during a specially arranged visit for invited trade press. In addition, the aerodynamic measurements are validated during on-the-road testing. The engineers thus benefit from having several powerful methods at their disposal simultaneously, which can be used to make Mercedes-Benz trucks as aerodynamic as possible.

Working together to find the best solution: co-operation between designers and production is essential

Co-ordination with colleagues from other core disciplines, especially between designers and the production team, is essential for the work of the aerodynamics experts. “The aim during development of a truck is always to find the best solution together,” says Kai Sieber, Head of Design, Brands & Operations at Mercedes-Benz. “For example, the camera arms of the MirrorCam give the new Actros a puristic appearance. Visually, this is an enrichment, as the vehicle’s focal point is shifted downwards due to the omission of the large mirrors, which also serves to optically underline the vehicle’s dynamics yet further in addition to saving fuel.”

The search for the optimum shape and position

So how exactly has the team’s work in the wind tunnel contributed to the further improved aerodynamics of the new Actros? For example, by means of tests in which the best position for the camera arms of the MirrorCam was determined. Possible positions were the upper and lower sections of the A-pillar and the upper part of the B-pillar. For these trials, a real Actros was used, on which the exterior mirrors were replaced by prototypes of the camera arms – mounted one after the other at the three test positions. The truck was placed on the weighbridge in the wind tunnel and the fans were started. The use of a weighbridge enabled the engineers to measure the air force acting on the vehicle as it flowed around it. The result: the best position for the camera arms is on the A-pillar in the area of the roof edge.

A solution was also sought that would prevent stray light from above reducing the performance of the cameras. In these tests, the small hood with which the MirrorCam arms are now equipped prevailed. And the engineers were also intensely involved in the development of the new, concave cab side deflectors. The new cab side deflectors also contribute to the new Actros consuming less fuel than any of its predecessors. 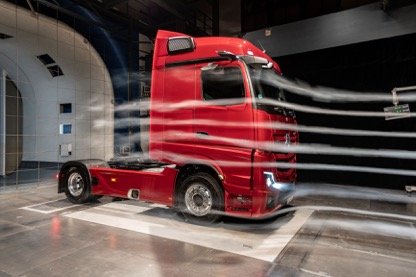 In addition to keeping fuel consumption as low as possible, the engineers also focused on keeping dirt out of the vehicle during their wind tunnel tests and CFD analyses. Especially for safety-relevant areas such as the windscreen and side windows, not to mention the lenses of the camera arms. The aerodynamics influence how much dirt kicked up by your own vehicle and vehicles in front actually remains stuck to the vehicle.

In operation for decades: the wind tunnel in Untertürkheim

The wind tunnel in Untertürkheim has been available to Mercedes-Benz developers for eight decades. Through continued targeted modernisation, the system is kept at the state-of-the-art. Two DC motors, each with an output of 2500 kW, set the nine-blade axial fan with its 8.5 metre diameter in motion – so powerful that it can generate gusts of up to wind force 17. To do this, around 9,000 m3 of air are blown horizontally through the 125-metre long, ring-shaped channel. In the test area, the vehicle stands on a turntable with a diameter of twelve metres, so that it can be exposed to the wind flow not only frontally, but also laterally at any desired angle. Integrated into the turntable in addition to a roller dynamometer is a six-component weighbridge. It is used for the highly accurate determination of numerous forces, including the air force. The forces are transmitted to load cells via levers and rods and can thus be evaluated.

Prestigious accolade: the new Actros is “International Truck of the Year 2020”

The sustainably improved aerodynamics provided by the MirrorCam of the new Actros is one of the reasons why the vehicle won the title “International Truck of the Year 2020”. In addition to the increased efficiency, the jury of what is the most important European award for the truck segment also highlighted the progress made in assistance and safety systems as well as in connectivity. The “International Truck of the Year” award is presented annually by Europe’s leading commercial vehicle journalists. Mercedes-Benz is the most frequently awarded brand in the history of the competition and has already enjoyed successes with all previous versions of the Actros.