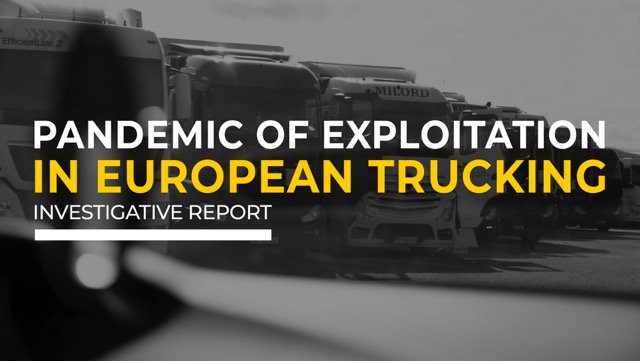 The report and documentary video released reveals that human trafficking is alive in European trucking, and has uncovered shocking human rights abuses on the doorstep of the European Union said ITF General Secretary Stephen Cotton.

“Alarmingly, human trafficking is a growing problem in the industry, and we’ve documented multiple cases where drivers from outside the EU have been trafficked into Eastern European countries, sign contracts at the bottom of complex subcontracting chains, and are then forced to work almost exclusively in Western Europe with little pay, false documentation and with no way out.”

“These drivers are moving essential supplies; the food we eat, the medicines that right we now desperately need, the clothes we wear and the goods produced by some of the biggest companies in the world. European governments and multinational companies can no longer turn a blind eye to this exploitation,” he added.

The investigation has revealed that transport companies are exploiting the lack of checks and controls by enforcement authorities during the pandemic.

Interviews with drivers have uncovered the exploitative practices commonplace in the industry and additional abuses that drivers have faced as a result of the Covid-19 crisis, including:

“What we have to remember is that truck drivers move the European economy, they move 75 percent of inland freight in the EU, and are essential for our survival and recovery post-coronavirus. Supply chains are only as strong as their weakest link and this exploitation is unsustainable,” said Edwin.

“Families are driving on highways alongside 40-tonne trucks driven by drivers that have not rested properly, are being forced to work excessive hours, are ill, or are victims of human trafficking. The roads of Europe are not safe. This exploitation must end now,” he added.

IUF General Secretary Sue Longley commented: “Health and safety in the food and drink supply chain is a life and death issue for everyone, especially during the Covid-19 pandemic. The findings of this report show that no multinational can guarantee that their transport supply chains are free from exploitation, which means they cannot guarantee that product is being safely transported. I call on all multinationals in the food and drink industry to work with the IUF, ITF and FNV-VNB to ensure they provide consumers across Europe with product that has been transported in a supply chain that guarantees safety and workers’ rights.”

ITF Inland Transport Secretary, Noel Coard, called on transport companies and their customers including major multinationals to act and end the exploitation exposed in the investigation.

“Instead of respecting these drivers, multinational companies are unaware or uninterested of what really happens in their subcontracted transport. Many multinational customers demand cheaper prices, and trucking companies offer cheaper wages with the result that drivers are exploited and road safety put at risk. This has to end,” he said.

“There is not one multinational transporting goods in the EU that can guarantee that these issues are not in in their supply chain, so our message to transport companies and their customers is simple: either you are part of the solution which we welcome, or part of the problem, and in that case we will hold you accountable,” he concluded

Video of the Month – TORSUS treks off-road with TERRASTORM Minibus!