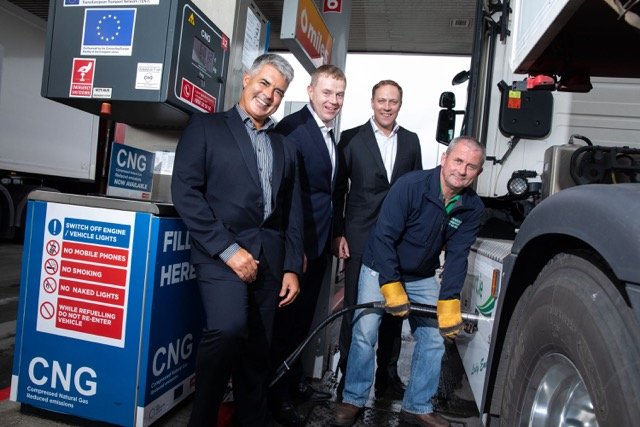 Ireland’s commercial transport fleet makes up just 3% of vehicles on the road, yet is responsible for approximately a fifth of transport’s carbon emissions.  Switching to CNG can reduce a Heavy Goods Vehicle’s (HGV), emissions by up to 22%. In the future, these vehicles can achieve zero carbon transport when operating on renewable gas. GNI has a strategic plan to achieve 20% renewable gas on the network by 2030.

The state-of-the-art fast fill facility at Circle K Dublin Port has the capacity to fill 50 HGVs a day with each fill taking no more than 5 minutes. This station marks the first public CNG re-fuelling station in a network of 150 filling stations to be developed in Ireland in the coming years.

CNG is natural gas which has been compressed to fit into a Natural Gas Vehicle’s (NGV) tank and is particularly suitable for use in commercial vehicles. It is a proven alternative to diesel or petrol and reduces transport costs by up to 25% and carbon emissions by over a fifth. There are an estimated 25 million NGVs in operation worldwide, and almost two million in Europe. The re-fuelling facility at Circle K Dublin Port is strategic public infrastructure which will be capable of providing a fully carbon-neutral fuel to the commercial transport market for the first time. Currently a small number of truck, bus and van manufacturers specialise in this low emission technology.

Commenting on the long awaited development, Denis O’Sullivan, Managing Director, Gas Networks Ireland said: “The opening of the station is a major milestone in the development of clean transport in Ireland.  The development of this ground-breaking network of CNG stations will, for the first time, allow Ireland’s commercial fleet to choose a cleaner fuel alternative. This first station has allowed us to establish the criteria, in design, safety and permitting, for future stations. Initially utilising natural gas, these stations are fully compatible with renewable gas. Working with partners like Circle K, private hauliers and public transport companies, work is well underway to deliver a comprehensive national network of stations. Ireland’s transport emissions continue to rise, while this is the by-product of much welcomed economic and employment growth, as a country we face significant challenges to meet our emission reduction targets. As the operator of Ireland’s gas network, we are leading the development of this new, cleaner transport network, to support Ireland in reducing its carbon emissions.”

Gordon Lawlor, Managing Director, Circle K added: “We are delighted to introduce Ireland’s first publicly-accessible, fast-fill CNG station through our partnership with Gas Networks Ireland. We are very proud to offer Ireland’s commercial fleet operators a cleaner and more cost-effective fuel alternative. At Circle K, we are committed to making our customers lives a little easier every day and together with Gas Networks Ireland we have plans to open additional CNG stations at key motorway locations in the near future.”