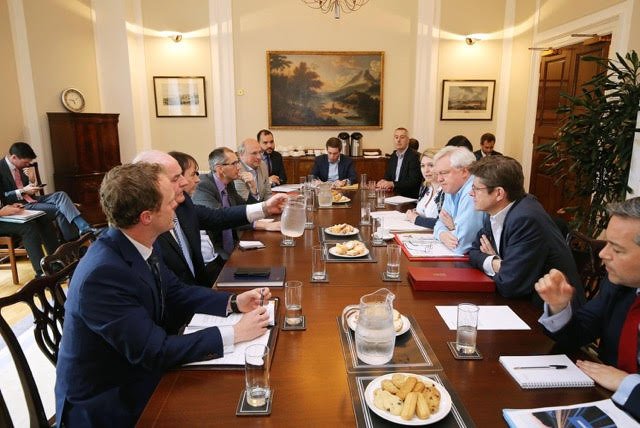 Supported by a delegation of members at a special meeting with leading British politicians, the Freight Transport Association (FTA) reiterated its call for an Irish Border solution which protects frictionless trading arrangements post-Brexit.

“Logistics operators are clear that the Irish Border must remain frictionless after Brexit, to ensure that trading relationships are protected and business can continue to flourish,” states Seamus.  “This meeting gave us the chance to share the concerns of the freight and logistics sector with Ministers, who were open to possible solutions which would protect the integrity of Ireland’s businesses, as well as its Borders.”

During the visit, the MPs discussed their proposed “maximum facilitation” solution to the Irish Border with Mr. Leheny and other business representatives and considered ways in which the constitutional and economic integrity of the UK could be upheld, while reinforcing commitments made to the people of Northern Ireland.

“The Irish Border situation is complicated, with physical and political constraints that need careful consideration before a workable solution can be found,” he continued.  “The conversations were a welcome opportunity to raise the concerns of the logistics industry directly with those at the negotiating table in Brussels, particularly the need to avoid infrastructure at the Border, and the fact that technology at the Border on vehicles will not be a workable solution.  Clarity over the rules of origin for goods is vital, and despite the fact that compliance for the North-South trading route will be difficult to administer, I am confident that our message – that Ireland needs to remain open for business, with no delays at its Borders – will be carried into the next round of talks with the EU.”

With Brexit, new technology and other disruptive forces driving change in the way goods move across borders and through the supply chain, logistics has never been more important.  Also present at the meeting were the following FTA member companies: Woodside Haulage –  Ballyclare; Surefreight – Newry; WS Dennison – Antrim & BP McKeefry – Maghera.