Home Editorial Is the truck becoming a tool of crime? 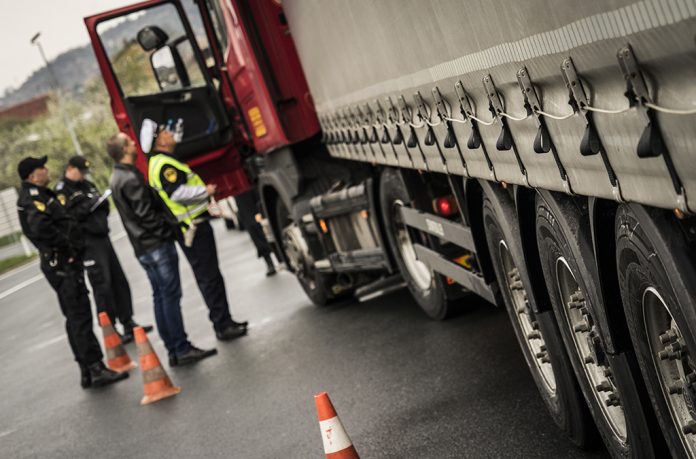 When the news broke that 39 people were discovered dead in the back of a trailer, there was revulsion in the road transport industry that such an event could happen. Everybody knew people were coming in on the back of trailers as they tried to get to a better life for themselves and their families. Most drivers would have seen people trying to climb on board trucks in the Port of Calais. Unfortunately, some drivers witnessed refugees jumping out of trucks in the UK, having stowed away in the most precarious and dangerous places on trucks and trailers. So too did the staff on ferries and the various enforcement agencies. In almost all of the cases where people were found in the back of a trailer, the driver or the owner were totally unaware what a human cargo was on board. Other service providers involved were most likely unaware that they were assisting human misery.

Th ere is however a difference between being aware of this type of activity and profiting from it. When people get involved in people trafficking, they are criminals, not innocent hauliers or shippers. The events in Essex at the end of October as first reported seemed like the truck involvement and that of its driver was innocent enough. An unsuspecting driver picks up an unaccompanied trailer at a port, then at or close to the delivery point, the driver opens what was effectively a tomb. As the time went on and the investigation seemed to spread across the island on both sides of the Border, it became obvious that the Police had some of the culprits in custody.

One person who did not cover himself in glory was the Minister for Justice, Charlie Flanagan. In a radio interview he was asked if he had any concerns about the involvement of the Northern Irish truck. Now remember the truck was operated and registered by a company in Bulgaria. This is perfectly legal and not unusual. So in media terms and general reporting while this was seen as having been possibly illegal and almost criminal, it was nothing more than a red herring. I will come back to this later.

Anyway Minister Flanagan fell for the media spin. In his answer on radio he replied: “I have serious concerns about Irish trucks operating under Bulgarian Licences and I will be speaking to my colleague on the matter, Minister for Transport, Shane Ross.” I hope he did, because Minister Ross would know that there was nothing illegal here. He would also realise that one of the main reasons companies “flag out” their trucks is to avail of more competitive insurance. If the Ministers have a difficulty with this practice, then they should start making it easier to trade in Ireland.

Let’s go back to the enforcement at the ports and frontiers. Those who travel through the Port of Calais will know there is a significant amount of resources available to help detect stowaways, something all drivers are happy to co-operate with. Calais is not a pretty place and some of the encounters with these people are far from friendly. Violence is often a feature at all ports. It is a miracle that a driver has not been badly injured or killed while trying to gain access to the port and the ferry terminal. So, when a truck arrives to the English side and stowaways are discovered, the truck and its driver are where the finger is pointed. But as a legal point, did the stowaway come in in a truck or a car ferry? Does the ship’s captain or the driver not carry the same liability? What about the management of the port? These are questions that need to be asked.

Getting back to Irish transport firms registering their operations abroad, the Irish Road Haulage Association has a clear position. ‘No company should be allowed to operate a “Letterbox” operation abroad, those that do should be liable to the same checks in Ireland as Irish registered trucks are here.’

View from the Operators’ Desk by Sean Murtagh –
sean@fleet.ie

Differing arguments and Viewpoints on the M20