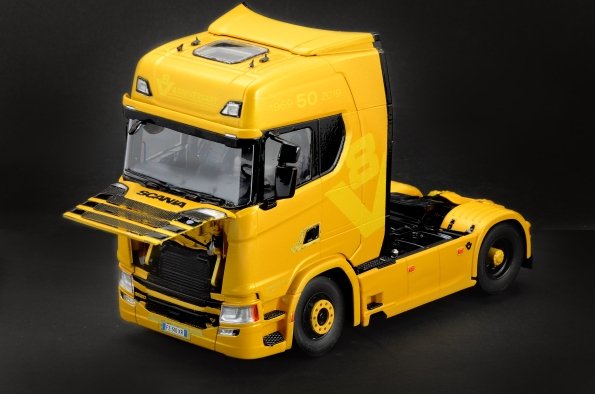 Italian model company Italeri has released one of the most familiar long-haul workhorses in 1/24 scale; the Scania 730S Highline 4×2, which takes truck modelling to new level of detail and realism.

The feature-packed self-assembly kit is designed to recreate the latest Scania S series and will appeal to seasoned as well as new-to-the-hobby modellers, truck fans and owners.

The officially licenced Scania kit is produced from brand new moulds such as those for the side skirts and exhausts, ensuring a fresh look for this truck. Metal photo-etched chrome parts and decals deliver further realism. An opening radiator grille, doors and tilting cab offer multiple display options.

Italeri always ensures its kits provide as much connection to the subject as possible and the Scania 730S Highline is no exception. Once the cab is tilted, an impressive engine bay can be viewed, featuring the new cylinder heads. The opening doors reveal a detailed interior and cabin filled with chrome decals and photo-etched parts. Rubber tyres and 50th Anniversary decals and a choice of international number plate options complete the look.

The 730S has been packaged and presented as a 50th Anniversary Edition celebrating half a century of Scania in 2019. Due to the pandemic, its production and release were delayed from their original dates in 2020.

Italeri believes modelling should be fun. Its kits have sufficient detail and quality to please an experienced hobbyist, but thanks to clear and concise instructions, are designed to be straightforward for modellers new to the hobby.

The Italeri Scania 730S Highline 4×2 (3927) is available this month from leading model shops and online outlets. Price £69.99, paints and glue are sold separately.