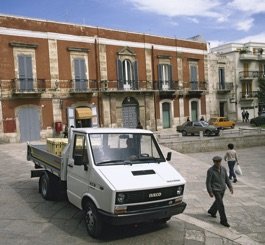 First launched in 1978, the Daily revolutionised light commercial transport with its truck-derived chassis with rear traction and independent front suspension, which givesit its unique versatility, reliability and efficiency.

Now in its third generation, the Daily has constantly evolved over the past 40 years, always remaining true to its DNA while pushing the boundaries of innovation and integrating the changing requirements of customers to become today’s champion of sustainability.

Throughout the 40 years since its launch, the Daily has introduced numerous industry firsts and received recognition from industry experts, resulting in an impressive collection of international awards.

The IVECO Daily is celebrating 40 years of pushing the boundaries of innovation, versatility and efficiency in light commercial vehicles. Since its launch in 1978, it has introduced ground-breaking innovations that have changed the industry: from the adoption of a truck-derived chassis with rear traction and independent front suspension, to the introduction of Common Rail technology in 1999 – a world first – or the advanced Electronic Stability Program (ESP) for regulating vehicle handling during steering and braking.

Over the years, the Daily has constantly evolved to meet the changing needs of customers, always remaining true to its DNA. It has led the way with its efficient and environmentally friendly technologies, as these demands havebecome increasingly critical to the transport sector. To this date, it is ahead of the industry in sustainability with the unique concept of the Daily Blue Power: a range that frees transport operators from the constraints of the strictest environmental regulations and was awarded the title of “International Van of the Year 2018”.

The more than three million Daily vehicles, manufactured on three continents, which are on the roads in 110 countries are testament to its popularity and exceptional capacity for adapting to meet the specific needs of our customers across the world.

Today the Daily is a vehicle at the forefront of the industry, with a success built on its historical strengths that make up its DNA – starting from its unique chassis frame, which gives it the robustness and versatility it is known for. The load-bearing structure with ‘C’ shaped, special steel cross-members, is the best platform for bodybuilders to adapt for the most diverse missions – including vehicles such as motorhomes, couriers, waste collection, tippers, cranes, public services, tow trucks and ambulances. It has gained recognition for its unique features, such as rear wheel drive and the 4×4 version.

It offers the widest line-up in the industry ranging from 3.3 tonnes to 7.2 tonnes of gross vehicle weight, and from 7.3 m3 up to 19.6 m3 cargo volumes. Its advanced features usestechnology to push the boundaries of performance, raise comfort to a new level, deliver more connectivity and lower its Total Cost of Ownership, reflecting its Business Instinct and making it the perfect business partner.

With the Blue Power Family, it leads the way in sustainability, anticipating the future with the most advanced diesel and alternative traction technologies: the Daily Euro 6 RDE 2020 Ready, the first LCV ready for 2020 Real Driving Emissions regulations; the Daily Hi-Matic Natural Power, the first CNG vehicle with an 8-speed automatic gearbox in the LCV industry; and the zero-emissions Daily Electric. This family offers the perfectsolution for unlimited delivery in urban and suburban missions, opening round-the-clock access to city centres with the strictest noise and emissions regulations.