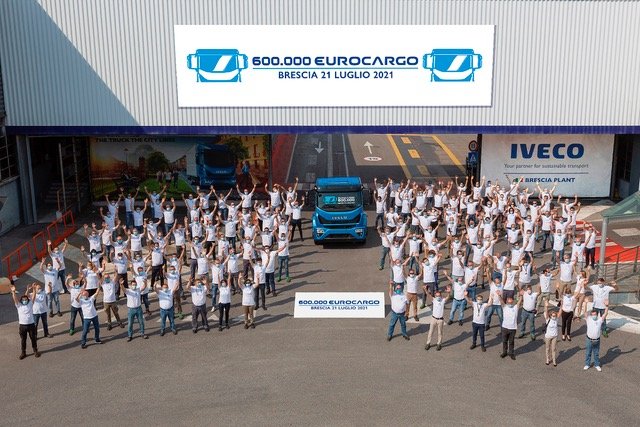 IVECO is celebrating the 600,000th Eurocargo medium range truck produced at its Brescia plant, an iconic production site for the brand that has played a key role in every generation of this vehicle. The Brescia plant has always been the heart of production operations for the Eurocargo, and thanks to the commitment and passion that its workforce of around 1,600 employees dedicate to their jobs.

Marco Colonna, Brescia plant director commented in reaching this milestone: “It is with great pride that we are celebrating the production of the 600,000th Eurocargo, whose fourth generation has been enjoying a continued success for many years. This milestone vehicle could not be powered by anything else but compressed natural gas (CNG), a tangible reaffirmation of IVECO’s constant commitment to sustainable mobility. Launched in 1991, the Bertone-designed Eurocargo was conceived to be one of the most innovative industrial vehicles on the market – as reflected in its remarkable sales success – with a modular cab platform allowing extensive scope for vehicle customisation without driving up costs. The significant history that lies behind us now guides us on a path of continuous improvement and innovation which, over the coming years, will see our vehicles evolve to become greener than ever.”

The Brescia-based team works in synergy in every phase of production, from assembly of the chassis to cab bodywork, painting and installation of the transmission, to fitment of the interior trim, all the way to final inspection. The factory also produces special versions for military applications and firefighting.