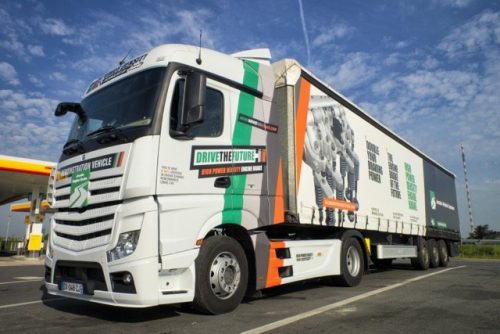 For more than 10 years, Daimler Trucks has relied on the braking performance of the “Jake Brake®”, an especially effective turbocharged compression release brake integrated into the engine and the engine control unit, which is both quiet and effective.

The Jacobs Engine Brake delivers an outstanding performance of up to 480 kW to the six-cylinder engine that is available with displacement ranges between 10.7 litre and 15.6 litre and output levels from 240 kW to 480 kW. Heavy-duty commercial vehicles such as the Mercedes-Benz Actros, Antos and Arocs, the Freightliner Cascadia and the Super Great from FUSO as well as the touring coaches and inter-urban buses from Mercedes-Benz and Setra are powered by this engine with an integrated Jacobs Engine Brake.

Jacobs Vehicle Systems has been a longstanding partner of Daimler dating back to 1962 when engine brakes were first installed on a Detroit Diesel Series 71 engine in an aftermarket application. Since 1984, Jacobs Engine Brakes have been standard equipment.

“With this one millionth engine brake for the heavy duty world engines, we recognise another significant milestone for us, and one that we can all be very proud of. We also recognise that this would not exist without the strong collaboration between the Daimler engineering team and our experts in engine braking technologies,” said Paul Paré, Senior Director, Marketing and Business Development, Jacobs Vehicle Systems.

As Jacobs continues to drive innovation to meet the ever-changing market demands, the company has developed and validated an enhanced version of its already successful HPD (High Power Density) technology. This latest technology delivers braking power twice as high as the previous versions at low engine speeds. Jacobs’ new technology achieves an impressive peak braking power of 611 kW in a 12.8 litre engine at 2,500 rpm.

Jacobs provides engine brakes to over 30 customers globally and has locations in Europe, China, Japan, India, and the U.S. In 2017 Jacobs announced the sale of its seven millionth engine brake.