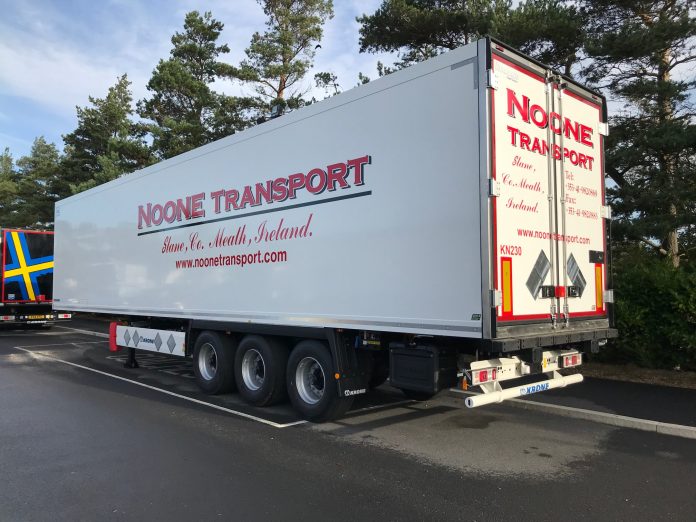 Due to continued growth within its European logistics operations, County Meath based Noone Transport has returned to Krone for an additional order of Cool Liner semi-trailers.

A mixture of 10 multi-temp‘ and standard single-temp‘ Cool Liners have beenadded to Noone‘s existing Krone double-deck and standard Cool Liners, for work on a range of UK and European contracts involving pharmaceuticals, foodstuffs, autoparts and retail goods.

Manufactured by Krone at its Lubtheen plant in Germany, the Cool Liners’ body strength lies mainly in the Duoplex Steel outer skins and heavy-duty aluminium floor. Additionally, for extra rigidity the chassis is constructed using double -T, longitudinal beams and a Z-profile rear traverse section with diagonal reinforcements. For added security, the rear doors are of ‘container-type‘ design, while the loading security certificate complies with European standard, EN 12642 Code XL – factors which Noone saysare important to ensure reliability and low cost of ownership.

“As our contracts become more diverse and our business continues to grow we need trailers which provide maximum flexibility and load security, said Daniel Noone, Financial Controller at Noones. “Therefore we opted for the Krone double-deckers and multi-temp’ trailers because they allow us to carry mixed cargo at different temperatures while guaranteeing load security and optimum utilisation of the load space.” 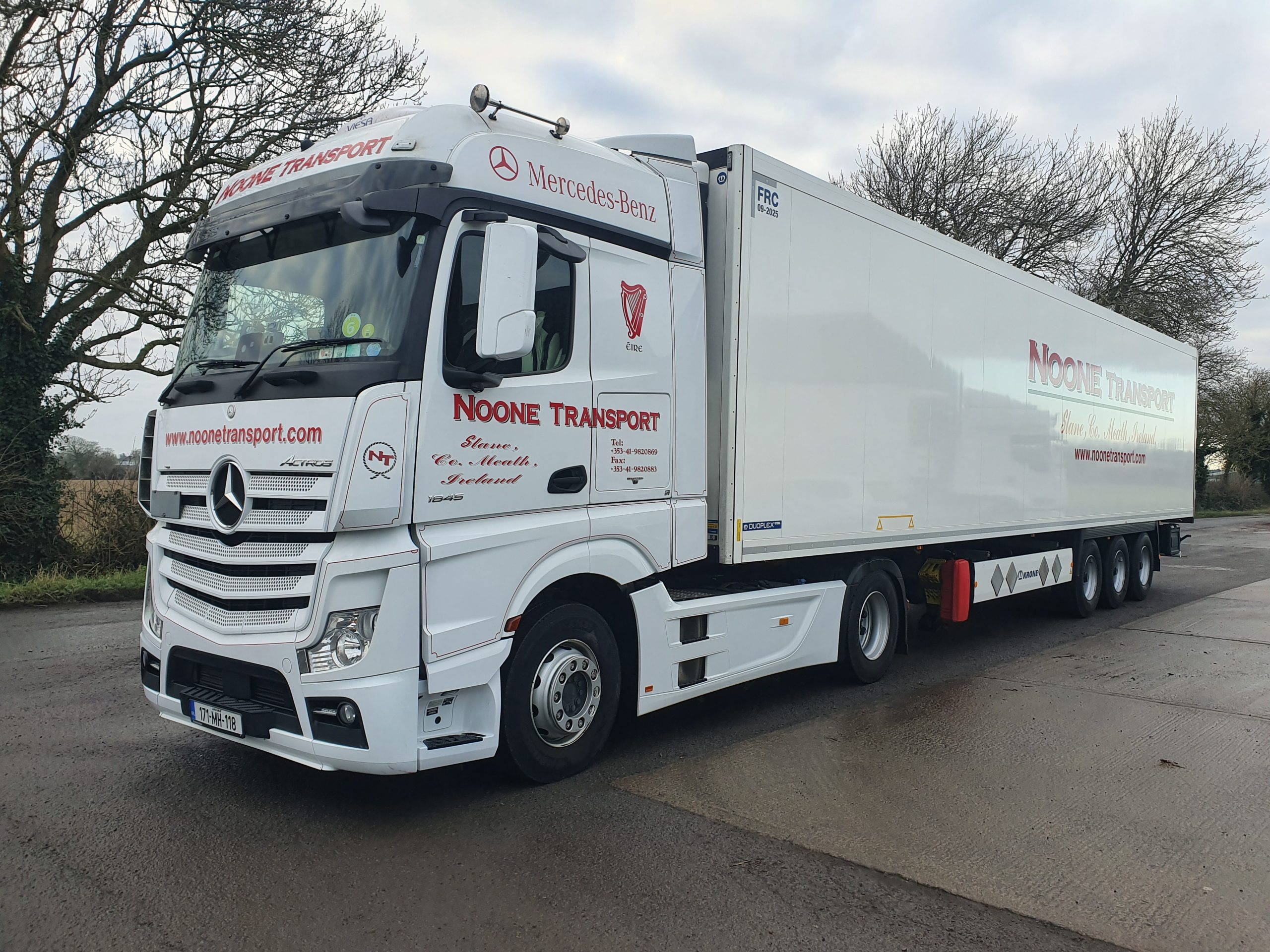 For dual temperatures and to separate the load, Noone is using Krone’s ISOWALL moveable bulkheads, which are also manufactured at Krone’s Lubtheen plant. The light-weight bulkhead weighs just 120 kg, is strong and is easy for one person to operate. A Krone designed balancer system, combined with a locking lever positioned at the top of the bulkhead, makes the ISOWALL easy to open, close and slide along the trailer.

Furthermore, when stowed to the roof, magnets hold the bulkhead in place, so there is no requirement for secondary locking or risk of fork lift obstruction. Furthermore the ISOWALL can be positioned hard-up against the load for added security and efficient use of load space. While in transit, each load benefits from KSC ProPlus Cool – the latest telematics system from Krone, which automatically monitors inside temperatures, coupling status, brake condition, door openings and trailer location. In addition ProPlus Cool handles complete document management via WLAN, which enables the traffic office to connect to the Krone Telematics Box to access and retrieve any relevant data.

“We bought our first Krone in 2008. The build quality and technology continues to be of the highest standard and exactly matches our transport needs,” added Daniel.

Established in 1986, Noone Transport operates a fleet of 45 Mercedes-Benz Actros tractor-units on a five-year replacement cycle, along with a 70-strong mixed trailer fleet including Fridges, Box vans and Curtainsiders. In June 2016 the company opened a 2,300 sq. m. high-tech warehouse and storage facility comprising 4,000 pallet-capacity, cross-docking and modern management systems accredited to ISO 9001.

A Sustainable 2020: CNH Industrial highlights year with a dedicated interactive...

Another milestone achieved at Combilift with 60,000th forklift truck delivered