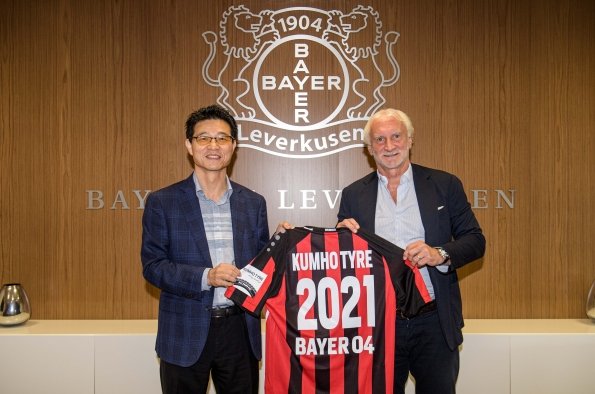 Kumho Tyre’s, sponsorship contract, which began two years ago with Europa League contestant Bayer 04 Leverkusen has been extended, meaning it continues to be the exclusive tyre partner of the club as well as its sleeve partner in the German Football Association cup competition, the DFB-Pokal.

As an official premium partner, Kumho will receive advertising space inside the Club’s home ground, BayArena, which includes being featured on the 3D logo cam carpets by the goals as well as having a considerable presence on its LED boards. A so-called ‘Powerpack’ makes it possible to simultaneously deploy both advertising panels, so they are perceived as one uninterrupted large-scale advertising space on the TV screen. Additionally, the digital substitute and extra-time boards will carry Kumho Tyre branding, as will the rear walls of the media room, the mixed zone, the area behind the substitutes’ bench, and both club magazines – ‘Werks11’ and ‘Matchday Flyer’. Kumho will also be granted premium hospitality packages and extensive international involvement in the Club’s media activities, while the team bus remains equipped with Kumho tyres.

In addition to the premium partnership, Kumho Tyre is still the Club’s exclusive sleeve partner in the DFB-Pokal and its logo will once again be visible on the left sleeve of the team’s shirts – the first occasion this season will be at the match against Locomotive Leipzig on Saturday, August 7.

Namhwa Cho, President of Kumho Tire Europe GmbH, explained the rationale behind the renewal of partnership: “Thanks to the sponsorship with Bayer 04 Leverkusen, the brand awareness of Kumho Tyre has increased significantly in the past two years, which is why we’ve decided to extend the partnership. Bayer 04 Leverkusen is the perfect partner for us, as the club stands for reliability, ambition and international prestige – key criteria in our sports partnerships. We are also an official partner of Tottenham Hotspur in the English Premier League and are very happy still to be sponsoring another top European football club.”

“Kumho Tyre is a successful company that thinks and acts globally, so is a strong partner that fits perfectly with our club and its aspirations. We recognize that Kumho management’s enthusiasm for the partnership continues to grow, which is the perfect basis for further co-operation,” said Fernando Carro, CEO of Bayer 04 Leverkusen.