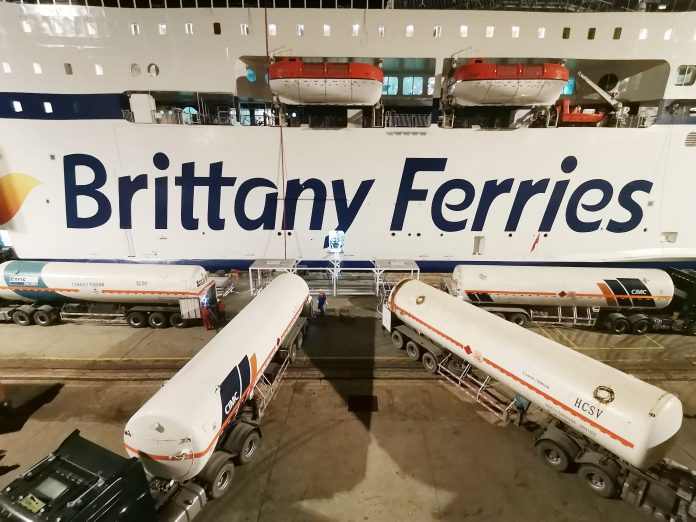 Brittany Ferries welcomes the start of construction of LNG bunker facilities in Bilbao. Fuel giant Repsol has confirmed the news which paves the way for the arrival of Brittany Ferries’ first LNG powered-ship Salamanca. Work on the bunker terminal be completed in the first half of next year, coinciding with the ship’s arrival.
Salamanca will serve UK-Spain routes and will be joined by a second LNG-powered vessel called Santoña arriving in 2023. A separate LNG bunker facility will be constructed by Repsol in Santander and preparatory work is already taking place.
Construction of the LNG bunker terminal in Bilbao represents an important milestone on Brittany Ferries’ journey towards fleet renewal and energy transition. It also reaffirms the long-term partnership between the French ferry firm and fuel supplier Repsol.
“This is welcome news and I applaud Repsol and our port partners in Bilbao for driving this forward,” said Christopher Mathieu Brittany Ferries CEO. “The move to cleaner, green fuels relies on an integrated approach that connects vehicles with fuel suppliers and other important partners like ports. We look forward to the completion of works in the months to come and to the arrival of our first LNG-powered ship.”
The Bilbao terminal will have a cryogenic tank with a storage capacity of 1,000m3, which permits the natural gas to be kept in a liquid state at -160°C. The flexible design of the terminal will allow it to service different vessels in the future, representing an important decarbonisation opportunity for port operations.
This project involves an investment of more than €10 million by Repsol.  The Port Authority of Santander has already begun work on the second facility, on the quay where the bunker station will be located.
Both Spanish terminals are to be co-financed by the European Commission through the CEF- Connecting Europe Facilities Programme.
About LNG:
LNG is a fuel which almost eliminates emissions of air quality pollutants such as SOx, and soot particulates. It also significantly cuts NOx emissions while offering clear reductions in carbon dioxide emissions when compared with standard marine fuels.
Brittany Ferries sees LNG as the best interim energy solution, on the road to future zero-emissions fuels such as ammonia, hydrogen and biofuels. Ships like Salamanca and Santoña will help Brittany Ferries reduce its carbon footprint as it moves towards a 2050 deadline set by the International Maritime Organisation.
In addition to Salamanca and Santoña, the company has just announced the order of two further vessels. These will be LNG-hybrid ships, replacing two of the oldest vessels in the Brittany Ferries fleet. They will operate on the Channel connecting France with the UK arriving in 2024 and 2025.
As well as operating in battery-only mode when manoeuvring in port, the LNG-hybrids will be configured to plug-in to shoreside power – when this solution is offered in ports.

Picture of the Week – Blending Classic with Hi-tech Electric power:...