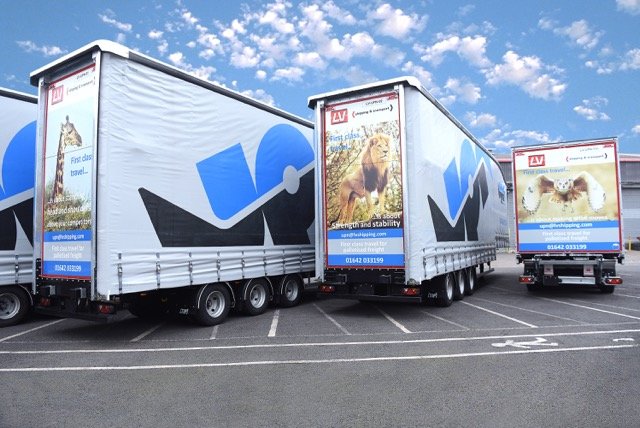 As part of a long-standing relationship between the two companies going back many years, LV Shipping & Transport has recently taken delivery of 16 new trailers from TIP Trailer Services, comprising a mixture of Dennison PSK flats, and extending flats, as well as four new SDC curtainsided trailers.

The four specialist SDC curtainsided trailers are working within the company’s UPN pallet network operation, and include three double deck trailers as well as one standard 13.2m trailer that has a Dhollandia tuckaway tail lift specified.

These trailers are working on high-quality palletised freight distribution within the UK network, UPN, which currently has over 90 members covering the whole of the UK, and European partners providing coverage through 26 countries.

Naturally, these new SDC curtainsided trailers feature the impressive UPN animal kingdom branding on the rear doors that is featured across all the UPN marketing activity, and the trailers are being used by LV Shipping mainly on trunking operations to UPN’s central hub in Lichfield, as well as on local deliveries within the north-east.

The 12 new Dennison flat trailers within the LV fleet are working within the oil, gas, steel market for existing customers all over the UK.

All 16 of the new TIP supplied trailers are replacing existing trailers within the LV fleet in the UK, and have been taken on a five-year deal with TIP Trailer Services, that includes full repair and maintenance.

“The relationship between LV and TIP has been a long-term success story with both companies working together to provide a range of trailers that meet all their varied operational demands. It is really pleasing to be working with such a professional organisation for so long,” said Mike Furnival, Managing Director, TIP Trailer Services UK & Ireland.

SOLUTRANS 2021: A Trade Show Focusing on Technological Innovation for Eco-responsible Transport – 16 to 21 November 2021

Linders confirmed as the latest dealership to offer the MAXUS range

Alcohol and drug misuse – is it time to test your...

Jarlath
Suzannah Robin, an alcohol and drug safety expert at AlcoDigital, discusses the problem of alcohol misuse during the COVID-19 crisis, and explains how online...

SOLUTRANS 2021: A Trade Show Focusing on Technological Innovation for Eco-responsible...