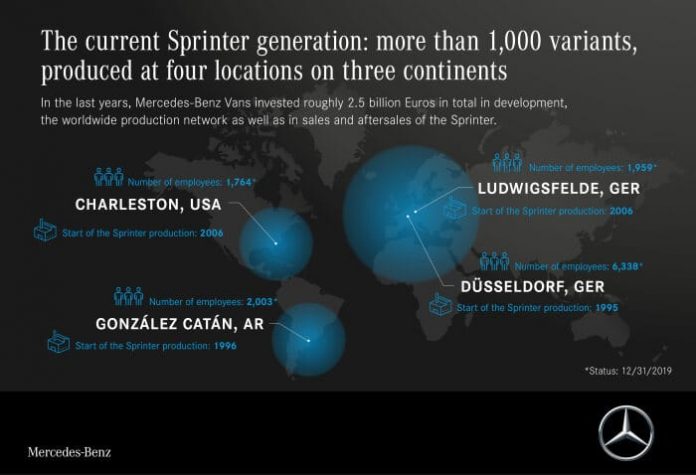 The Mercedes-Benz Sprinter has been the success model from Mercedes-Benz Vans for 25 years now, and is a flagship in the LCV sector. In 1995 the first Sprinter left the assembly line at the Mercedes-Benz Düsseldorf plant. Only one year later, the Sprinter was built for the Latin American market too, in Gonzalez Catan, Argentina. Since 2006, Sprinter production has also been in Ludwigsfelde and in Charleston, South Carolina, USA.

“The Sprinter is our classic and is really popular all over the world. Since the Sprinter came on the market in 1995, a total of almost four million units have been built worldwide,” said Dr. Ingo Ettischer, Head of Mercedes-Benz Vans Operations. “The current model is built in four of our five own van plants on three continents: in Europe and in North and South America, in Düsseldorf even as an electric version since the end of 2019.”

In March 2018, production of the third generation, the latest Sprinter model, was started in the two main plants in Germany. At the Mercedes-Benz plant in Düsseldorf, the panel van version has been produced since then, whilst the open model series (chassis) is built in Ludwigsfelde in Brandenburg. The end of 2019 also saw the start of production of the eSprinter in Düsseldorf, where conventionally driven and all-electric vehicles are produced on one production line. In order to satisfy demand in North America, production of the third Sprinter generation started in September 2018 at a purpose-built new production hall in Charleston, SC, USA. Also in Charleston, the Metris (Vito) has been assembled on another line since 2015, the plant has been greatly expanded and now employs around 1,700 people. The plant in Gonzalez Catan near Buenos Aires in Argentina now completes the world-wide Mercedes-Benz large van production network as the fourth plant; where production of the newest Sprinter started in September 2019.

Due to worldwide restrictions because of the COVID-19 pandemic, the Mercedes-Benz Van plants had stopped production from the second half of March 2020. At the end of April, production started up again step by step, and shortly afterwards normal operation was resumed.

“The vans of Mercedes-Benz and above all our Sprinter shape the streetscape, especially in these challenging times – not only for the huge number of delivery services or as health service vans,” said Ettischer. “So I’m very pleased that the assembly lines at Mercedes-Benz Vans have been running again since the end of April and we – of course observing the necessary safety and hygiene measures – can satisfy the demand for our vehicles again.”

Since its market launch in 1995, the Mercedes-Benz Sprinter has given its name to an entire vehicle
class. The third generation of this best-seller has been on the market since June 2018. With car-standard safety features, Mercedes PRO connect digital fleet solutions, the innovative multimedia system MBUX (Mercedes-Benz User Experience), and an additional front wheel drive, the Sprinter is one of the innovation drivers in the segment.

The Sprinter’s broad range of variants remains impressive: more than 1,000 different versions can be configured from the possible bodies, chassis, drive concepts, tonnages and equipment details alone. In the third generation, there is an even larger selection of drivetrains, thanks to the newly available front wheel drive and two transmission types developed for it, including the 9-speed automatic torque converter transmission. With these drive variants, the current Sprinter offers the ideal basis, for example, for upgrading to a refrigerated van or an ambulance and, with the so-called traction head, it can be used as a mobile home.

At the end of 2019 the Mercedes-Benz eSprinter celebrated its grand Job No.1 and it is now making a decisive contribution towards ensuring that the vision of locally emission-free delivery is made reality, in which it covers the largest possible area of application in urban logistics. Initially, the eSprinter is being offered as a panel van and a permissible gross mass of 3,500 kilograms. Its maximum loading volume is 11 m3 – just like a comparable Sprinter with combustion engine. The electric drive in the eSprinter drives the front wheels with an output of 85 kW (peak output) and a torque figure of up to 295 Newton metres. A flexible payload and battery concept moreover allow adaptation to individual needs for practical use. The range with a utilisable battery capacity of 47 kWh (installed: 55 kWh) is 168 kilometres[2], [3] with a maximum load of 891 kilograms. A second battery option takes into account other priorities in the use parameters: the configuration with a usable capacity of 35 kWh (installed: 41 kWh) enables a range of 120 kilometres2, 3 to be achieved. In turn, the maximum load rises to 1,045 kilograms. The integrated quick-charge function also ensures flexibility and means the battery can be recharged from 10 percent to 80 percent in around 25 minutes. The maximum speed can be configured to suit the task at hand: the top speed can be set at either 80 km/h, 100 km/h or 120 km/h.