Home Breaking News Musgrave Group donates over €1 million worth of funds and goods to... 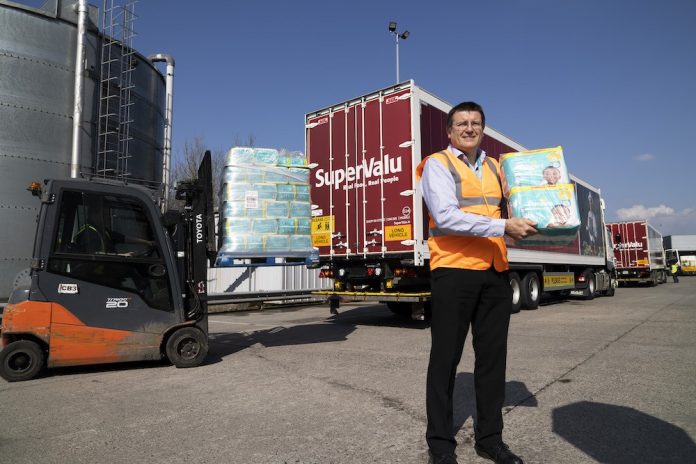 Musgrave Group, together with its retail partners, colleagues, and shoppers, has donated over €1 million worth of funds and goods to support the Ukrainian people.

Over €875,000 in funds has been donated to the Irish Red Cross and UNICEF Ireland by Musgrave and its shoppers to support those impacted by the war in Ukraine.

Shoppers across Musgrave brands including SuperValu, Centra, Donnybrook Fair, Musgrave MarketPlace, Mace NI and Daybreak donated €625,000 to the Irish Red Cross and UNICEF Ireland over recent weeks. In addition to the funds raised by shoppers, €250,000 was donated directly by Musgrave Group to the charities.

The fundraiser was launched in stores across the island of Ireland beginning from March 2nd. Shoppers in SuperValu, Centra and Donnybrook Fair were able to donate €2 in the Republic of Ireland or £2 in Northern Ireland via a simple “Tap to Donate” mechanism in store at the till. All the funds raised will go directly to the charities.

As well as raising funds, Musgrave also provided several truckloads of essential supplies for Ukrainian refugees arriving in Ireland and Poland. Individual Musgrave employees are also supporting this cause, with some providing help on the ground at the Ukrainian border and several Musgrave truck drivers driving goods to countries bordering Ukraine.

Noel Keeley, CEO Musgrave Group said: “It has been devastating to see the impact of the war in Ukraine. At Musgrave, we have Ukrainian colleagues, family members and friends, and we wanted to act quickly to help those who need it most. I would like to acknowledge all those who worked so hard to put in place such a fast response and a heartfelt thank you to our customers for their generosity. These donations are essential to help people who are suffering, but what we all want to see is a peaceful resolution to this conflict, sooner rather than later.”

UNICEF Ireland, Executive Director Peter Power said “The horrific war in Ukraine continues to pose an immediate and growing threat to the lives and well-being of the country’s 7.5 million children. UNICEF is doing everything possible to reach all those in need. A special thanks to shoppers at SuperValu, Centra and Mace Northern Ireland for showing such solidarity with children and families in Ukraine. Your generous support ensures UNICEF can reach more people in Ukraine with critical supplies and services. I also want to thank Noel Keeley, and the whole team at Musgrave, for making this incredible fundraiser happen, and for bringing it into so many stores across Ireland. Everyone’s efforts will make a life-saving difference to the children of Ukraine.”

Musgrave is working with charities and government to establish potential employment opportunities across our organisation for Ukrainians who have sought refuge in Ireland. As Musgrave is the largest private employer in the country, with locations in every community across Ireland, the company is well positioned to offer a variety of flexible jobs in locations across the country, as well as the essential care and support that people coming to Ireland from Ukraine will need.