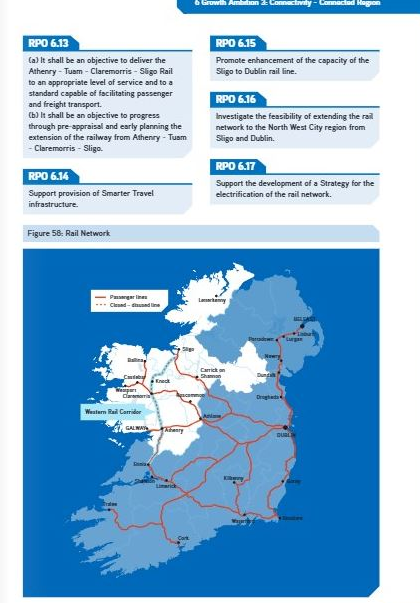 West on Track welcomes the strong support for the reopening of the Western Rail Corridor in the North West Regional Spatial & Economic Strategy (RSES), which was formally launched on behalf of the Government yesterday. The strategy contains two specific Regional Policy Objectives (RPO 6.13) in support of the development of the railway:

Describing the Western Rail Corridor as “of strategic importance” the Strategy says it represents a key enabling piece of infrastructure for the region that presents an opportunity to effect ‘transformational change’ in the realisation of the Atlantic Corridor. It can link the economies of three major centres in this part of the region (Limerick, Galway and Sligo). It also offers a sustainable alternative to car travel and advancing Ireland’s sustainable development goals (p.222).”

This is hugely significant in the context of the draft Programme for Government which commits to taking appropriate action on the Western Rail Corridor.

It should be stressed that despite misleading claims by a local politician that a greenway is proposed for this route all future County Development Plans are now subject to Policy Objective RPO 6.13 and greenways cannot be located on any part of the Western Rail Corridor. This does not preclude the provision of a north-south greenway, whatever its title, on an alternative or parallel route but any such development will be required to be a safe distance from the railway.

Meanwhile, Galway East TD & Minister for Rural Affairs Sean Canney has welcomed the launch of the Spatial and Economic Strategy 2020-2032 as a key strategic plan for the North West region, including Galway.

The North West Regional Assembly is responsible for the planning and social development for counties including Galway, Mayo, Roscommon, Leitrim, Sligo, Donegal, Monaghan and Cavan.

Minister Canney said: “The spatial and economic strategy is very important for the region, regional development and sets the tone for local authorities in preparing their county and local area plans.

“I welcome in particular Objective RPO 6.13, which specifies delivery of the Athenry-Tuam-Claremorris-Sligo rail line to an appropriate level of service and to a standard that would be capable of facilitating passenger and freight transport.

“This objective copper fastens the protection of the existing railway line for future use.

“I also welcome the Strategy’s support for greenways as an economic driver and I again restate my belief that we can deliver both rail infrastructure and complementary greenways for the region.

“As chair of the Atlantic Economic Corridor Task Force, I want to acknowledge the work of the Assembly’s Director, David Minton and his team in producing this very important document to help deliver regional development and growth.

“I also want to acknowledge the work of the Assembly’s chair, Councillor Declan McDonnell, and all the members for their work on behalf of the region.