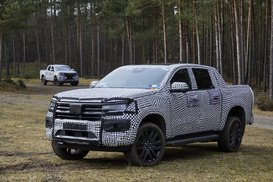 Volkswagen Commercial Vehicles (VWN) will present the completely new generation of its Amarok pick-up in 2022, which will be capable of even more both on- and off-road. Designed and conceived in Germany and Australia, in association with Ford (with the new ranger), built in South Africa, the new Amarok will once again take its place at the top of the pick-up B segment with excellent specification, a greatly expanded array of driver assist features and a much larger range of drive systems than its predecessor. A first few disguised models of the new Amarok are already out and about in Europe.