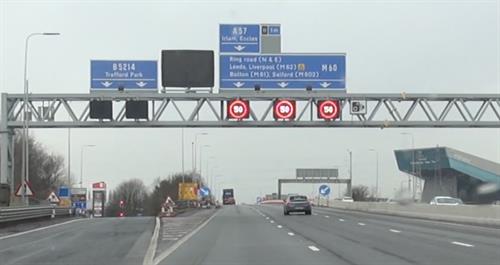 The Department for Transport in the UK has announced that the roll-out of new all-lane smart motorways is to be put on hold.

This latest move sees new schemes paused until there is a full 5 years of safety data on current projects. It was announced alongside an additional £900m in safety measures for existing all-lane running motorways (ALR).

An investment of £390 million in 150 additional emergency areas for drivers will also be put in place, creating a 50% increase in places to stop by 2025.

The government’s announcement falls in line with the Transport Committee’s latest recommendations that the rollout of new ALR smart motorways should be paused until a full five years’ worth of safety data becomes available for schemes introduced prior to 2020. After this point, the Government will assess the data to make an informed decision on the next steps.

ALR smart motorways were first introduced in 2014, and as the name suggests, are motorways that permanently use the hard shoulder, increasing the road capacity by an additional lane. The lane is only closed by digital signage when there has been an incident, obstruction, or other danger to motorists.

Despite this, many motorists hold anxieties about their safety, heightened by several fatal collisions involving stationary cars being hit from behind. Such concerns are demonstrated by a recent IAM RoadSmart survey, which revealed that the vast majority of respondents (85 per cent) want a halt on their construction until the safety case is fully proven.

Furthermore, 84 per cent of those surveyed has little faith in the current safety systems’ abilities to detect them if they were to breakdown in a running lane and protect them until assistance arrived.

Neil Greig, Director of Policy and Research at IAM RoadSmart, commented: “The news that the government will pause all new smart motorways is strongly welcomed by IAM RoadSmart. As demonstrated by our survey, it has become increasingly clear that for many drivers and riders, the initial scepticism has not been overcome with many having lost all confidence in the safety of smart motorways. This decision will give National Roads time to rebuild trust and win them back.

“Five years of data is what we would expect if we are to prove that a road safety intervention of this scale is effective. However, the UK still has some of the most congested motorways in Europe so it is vital that the additional funding earmarked for improvements is ringfenced and not diverted elsewhere.

“IAM RoadSmart have continuously stated that Smart Motorways should never have been opened without the stopped vehicle detection technology delivering the guaranteed levels of incident management that were promised, in addition it became clear very quickly that the spacing of refuge areas is not sufficient.  Given that the data collected will determine the future Smart Motorway strategy we are concerned that the clock is already ticking and will be urging the government to prioritise the proposed upgrades so they can have the maximum impact.

“IAM RoadSmart are ready to work with the authorities to educate and inform drivers and riders about the safest ways to use new motorway designs.  For far too long it was assumed that users would simply adapt to the new rules but the lack of information has been a key issue for us and during this evaluation period we will campaign for more to be done to ensure that Smart Motorway users become increasingly confident in using them and feel safe in doing so.”