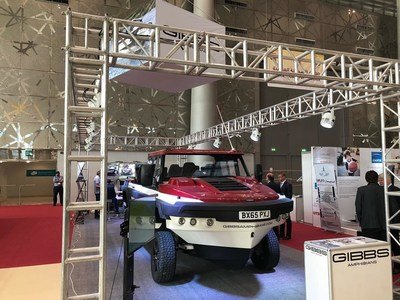 Get winter ready over land and water with the Gibbs Humdinga, a 4WD, 7m long, High Speed Amphibian with robust off-road and on-water capabilities. It can carry up to 1,000kg, depending on its configuration, with seating options ranging from 3 to 9 seats, with the signature Gibbs central driving position. It exceeds 60 km/h on water and over 120 km/h on the road, using a V8 diesel engine driving the wheels and twin Gibbs proprietary water jets, making it more environmentally friendly than a helicopter, one of the few vehicles that can access the same environments.

The Gibbs Humdinga is one of the more rugged vehicles created by Gibbs, and makes the Humdinga a flexible platform, capable of supporting a number of applications from logistics to search and rescue, from police patrols to private leisure. It is being manufactured under license in other parts of the world.

The privately held, UK-based business, founded by Alan Gibbs with Neil Jenkins, has been developing High Speed Amphibian (HSA) technology since 1994. Since then it has developed over 8 different vehicles ranging from 3m to over 10m within many differing applications, including the record-breaking and award-winning Aquada, the famous Quadski and the robust Humdinga.