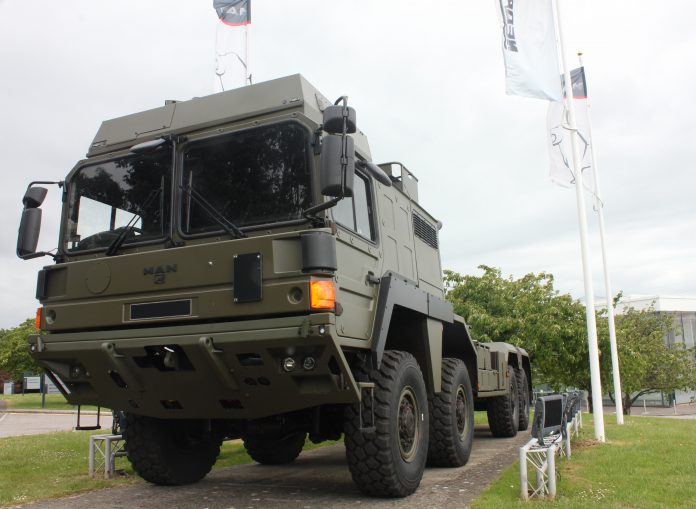 MAN Truck & Bus UK Ltd has successfully completed the delivery of five SX45 (L) Variant vehicles to the British Army under a £2.6m contract extension entered into in July 2017.

MAN previously provided five of these vehicles in 2012 to support the British Military’s Land Environment Air Picture Provision System (LEAPP) Programme. The vehicle is used as a mobile platform for the Army’s deployment of highly specialised radar equipment. This delivery, therefore, further increases the British Army’s existing capacity to deploy its radar systems.

This delivery has been a partnered team solution. MAN undertook overall project management responsibility for the programme and the vehicles were manufactured in Vienna by MAN’s strategic partner, Rheinmetall MAN Military Vehicles Austria (RMMV Ö), through a subcontract worth €2.6 million. Vehicles were completed and shipped to the UK over the period December 2018 to April 2019. Following vehicle inspection checks and liaison with the UK MoD, all five vehicles were accepted by the customer in June 2019.

The project posed some challenges for the team in that the vehicles needed to be ordered and delivered within a specific timescale and before the vehicle variant came out of production in late 2017. There was also a gap of five years from the initial contract, which generated some notable supersession and parts obsolescence issues. These five vehicles are the last SX45 (L) vehicles that will ever be produced.

Thomas Hemmerich, Managing Director MAN Truck & Bus UK Ltd commented: “The project is a further example of the close partnership MAN and RMMV has maintained with the UK MoD since the British Army procured more than 7,500 HX logistics vehicles from MAN between 2005 and 2013. It also highlights the prolonged supportability of the HX / SX family of vehicles, which sets the global standard for robustness, mobility, performance, flexibility and modularity.”