Home Breaking News PICTURE OF THE WEEK/VIDEO OF THE MONTH 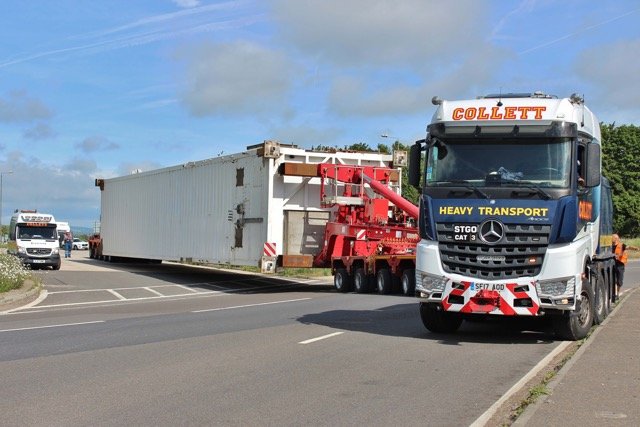 Due to the dimensions of the 4.4m high, 35m long cargo, Collett was required to engineer a bespoke solution to deliver the first, and largest of the three cargoes.

Flat trailers and turntable technology would provide an unsuitable option as the loaded cargo would prove unable to traverse the UK motorway network, therefore, Collett began developing a solution in which the cargo would be suspended between two multi-axle bogie trailers.  Employing their clamp trailer, which is predominantly used for the transportation of wind turbine tower sections, would provide the necessary hydraulic capabilities.  This would allow the Collett Team to raise and lower the height of the 76-tonne load as the route demanded but would require additional modification to engineer a suitable system for securing the load to the trailer.

Engineered in meticulous detail, Collett designed a bracket system to secure the load to the trailers.  This bracket and pin system would attach to the cold box, providing an anchoring point for the clamp to secure to the load.  Each of the brackets, pins, adaptors, box sections and lugs were fully BS EN:1993 and PD 970:2005 compliant, and would allow Collett to securely transport the loaded 45m long rigid cargo the 110 miles from collection to delivery.  Once design of the system was complete, and having undertaken 3D Solidworkssimulations to analyse the behaviour of the components, fabrication of each element began.

Due to the length of the cargo and loaded vehicle, numerous sections of the route demanded street furniture removal, road widening, parking restrictions, tree pruning and manual steering requirements.  This also included full motorway closures to allow the combination to undertake contraflow manoeuvres and continue on the route. Employing their in-house designed and engineered bracket system, Collett loaded the cold box to its clamp trailer and set off on its 110 mile journey.  With the largest of the three cargoes safely delivered to site, the two smaller 29m and 25m loads followed the same route over the preceding days successfully completing the project. 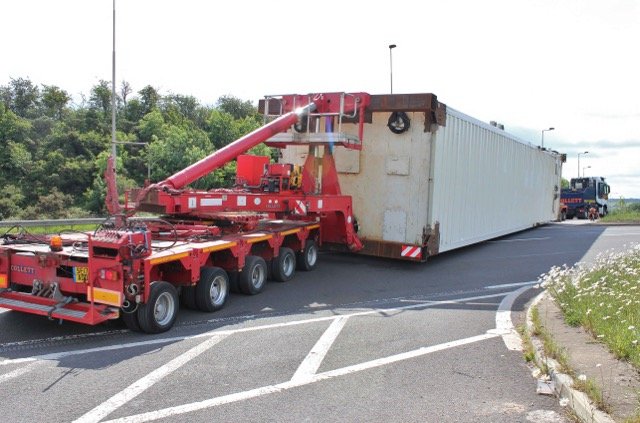