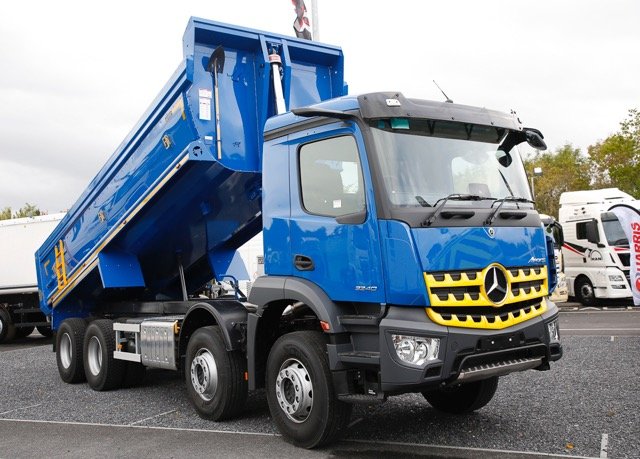 The Commercial vehicles division of Mercedes-Benz Ireland had two reasons to celebrate after scooping two top honours at the recent Fleet Transport Awards 2020.

First was the Irish Truck of the Year 2020 ‘Construction Truck Award won by the Mercedes-Benz Arocs 8×4 against strong competition. Second was the success of the recently launched Mercedes-Benz Actros which won the ‘Truck Innovation Award 2020’ in recognition of its ‘revolutionary’ new MirrorCam system.

In their citation, the organisers Fleet Transport pointed to Arocs for being ‘a loadable truck that delivers power, robustness and efficiency in equal measure’. Particularly appealing to adjudicators, it said, was its high cab and elevated driving position, features that contribute to its all-round visibility and safety.

The MirrorCam system fitted as a standard feature on the new Mercedes-Benz Actros and Arocs, for which it won the coveted ‘Truck Innovation Award 2020’, replaces conventional wing mirrors to improve aerodynamics and deliver ‘an altogether safer and easier driving experience’. Projecting exterior images onto two screens within the cab, MirrorCam eliminates driver blind spots, reducing the risk of an accident as drivers undertake everyday manoeuvres such as exiting motorways, changing lanes and reversing.

Fergus Conheady, Sales Manager for Mercedes-Benz Commercial Vehicles in Ireland stated at the event, attended by 900 representatives of the road transport sector: “We are delighted that adjudicators chose to honour Mercedes-Benz with these two coveted awards, particularly so, given the highly competitive field of challengers we were up against. We congratulate and thank members of the Fleet Transport team and the judging panel for what was once again a hugely successful Gala event and one of the highlights of the year for the commercial vehicle industry.”

Pictured is the new Mercedes-Benz Arocs 3240 8×4, with Gleeson body-built tipper body, which won the Irish Truck of the Year 2020 ‘Construction Truck Award’ and featuring the ‘Truck Innovation Award 2020’ winning MirrorCam system on display at the Fleet Transport Awards Exhibition Arena at the Citywest Hotel, Dublin.