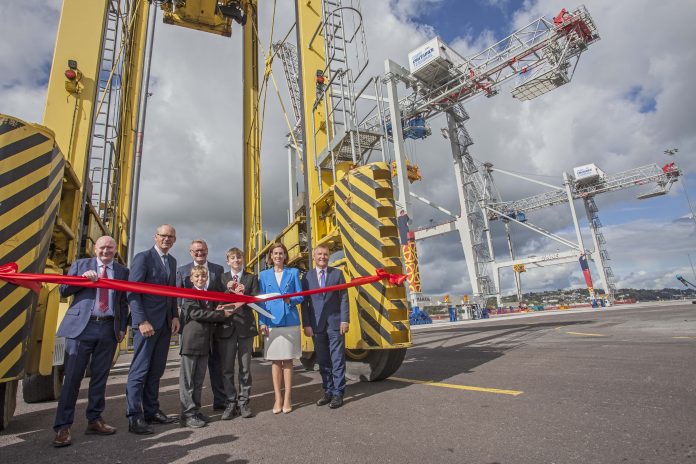 The launch of CCT is a hugely important milestone for the PoCC and represents the largest single investment in marine infrastructure of any Irish port over the last 100 years. The new terminal, which is the result of an €89 million investment, became operational in April 2022 and enables the port to deliver more efficient container handling facilities.

With one of the largest deep-water, multimodal berths in the world (13-meter depth and 360 meters in length), the container vessels that can be facilitated in Ringaskiddy will be the largest that can be accommodated anywhere in Ireland. When fully operational, on completion of the M28 road network, CCT will have the capacity to handle 330,000 TEUs (Twenty-foot Equivalent Unit) of cargo. This is set to have significant economic benefits for Cork and the Munster region, as well as the national economy.

Earlier this year, as part of the CCT journey and to help welcome the new colossal cranes to the Cork harbour community, PoCC hosted a competition with local primary schools to ‘Name the Cranes’. The winning names for the two giant 50m ship-to-shore Liebherr cranes, as chosen by Crosshaven Boys’ National School were ‘Mahain’ and ‘Binne’, inspired by the old Irish folklore story about two giants who lived in Cork harbour.

Representatives from Crosshaven Boys’ N.S. were invited to the official ribbon-cutting ceremony at CCT in recognition of their participation in this monumental milestone.

Minister Hildegarde Naughton with special responsibility for transport and logistics, spoke about the importance of Maritime Transport for Ireland at the official opening today.  Minister Naughton stated: “Maritime transport accounts for more than 90% of Ireland’s international trade and the Port of Cork has played an integral role in keeping Ireland connected, as part of the global supply chain. The Cork Container Terminal is already strengthening Port of Cork’s position on a global scale and on completion of the M28 will welcome further increased capacity for international transport and trade. It is also important to acknowledge the Port’s success in completing the project despite the challenges brought about in recent years by Covid-19 and Brexit. I offer my warm congratulations to everyone involved. The Port of Cork and Dublin are the only ports in Ireland capable of servicing all six shipping modes – lift-on/lift-off, roll-on/roll-off, liquid bulk, dry bulk, break bulk and cruise. On that basis, the Ringaskiddy re-development will be beneficial not only to the Port, its customers and Cork, but to the entire country.”

At the launch, it was highlighted in an address by PoCC Chairperson, Michael Walsh, that CCT represents the first phase of an overall proposed development plan for the Port of Cork.

Mr Walsh stated, “CCT represents the biggest investment in port infrastructure in the history of the state. It will bring further efficiency to the port with major benefits to the local and national economy. By increasing the efficiency of infrastructure, the costs of trade will reduce, which in turn helps to reduce inflation and the cost of living. It will also bring value to exporters, and a boost to Irish business.

This is the beginning of an exciting new chapter at Port of Cork as we seek to meet the next phase of needs of our community and customers.  As we look forward towards a Vision for 2050, we see huge potential for our beautiful harbour to continue its role as a focal point for our community to live in and enjoy, as well as a key gateway for global trade and enabler of Net Zero.

We would like everyone’s help in developing a new Masterplan to 2050, which will act as a blueprint for the future growth and development of the Port of Cork.  I encourage our local community, customers and national stakeholders to share their ideas when we launch a consultation on our draft plan in the coming weeks.”

As one of Europe’s core ports, PoCC is developing a Masterplan to 2050, which will act as a blueprint for the growth and development of the Port of Cork over the next number of years. Details of which to be delivered in the months ahead, following public consultation.

Eoin McGettigan, CEO, PoCC, who acted as MC for the proceedings, closed the proceedings with another message about the future: “It is really important to us that we work with our colleagues, neighbours and customers in the local area to make sure that the development of the Port of Cork is something that everyone is proud of.

Mr McGettigan added: “As we look toward the future, reducing Ireland’s carbon emissions and creating a cleaner, greener future is a priority which will require a joint effort from everyone, including industry and businesses nationwide. I would like to reaffirm the Port of Cork Company’s commitment to playing its part on this journey, particularly with facilitating the development of the Offshore Renewable Energy sector in Cork harbour over the next few years.”