Home Features Power Steering? How the workplace of truck drivers has changed over the... 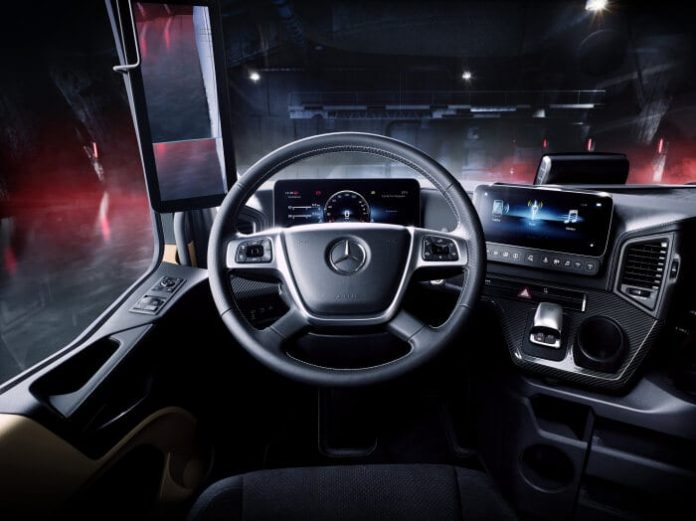 Oh how the workplace of truck drivers has changed over the decades! A quick look at the cockpits and steering wheels of the different model series makes clear the technical transformation which the so-called human-machine interface (HMI) in trucks has undergone through the past decades. The desire to continuously improve ergonomics, operating comfort and networking inside and outside of the vehicle is really clear here.

A painted dashboard in sheet metal, a huge yet slender Bakelite steering wheel, a range of different switches and don’t forget the ashtray! That’s what the first cockpits looked like more than 60 years ago in heavy-duty Mercedes-Benz trucks with a short bonnet. They were built from 1958 until the 1990s and still have legendary status today due to their great robustness. 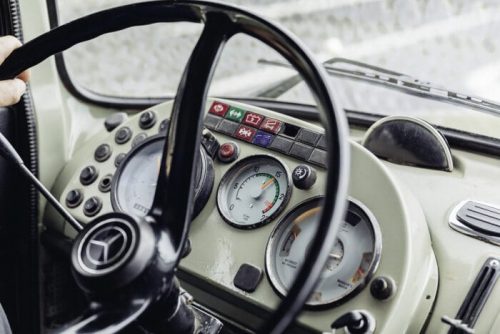 In the left image: the cockpit of a Mercedes-Benz 1924 from 1972. From this workplace, the driver monitored the workings of the indestructible OM 355 “Africa engine” under the short bonnet up front. 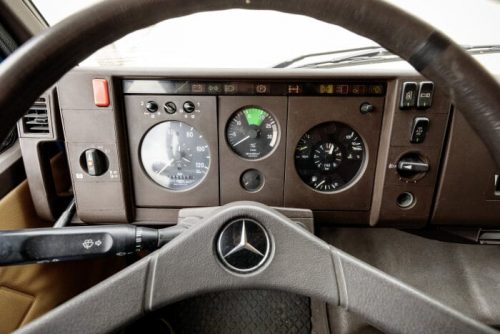 Next to it, a steering wheel and instrument panel of the so-called Leichte Klasse (light class) or LK cab-over-engine truck models which were characterised by a desire to achieve greater functionality and clarity. This precursor to the Atego was built between 1984 and 1998. You’ll also find a picture of the driver’s workplace in a Mercedes-Benz 1317 tractor unit from 1989. Typical features are the 1980s brown tones, the modest number of switches and the function and warning lamps positioned on the upper edge of the dashboard.

Major modernisation came in the second generation of the Mercedes-Benz Actros which rolled off the production line between 2003 and 2008, shown here on the right. The steering wheel housed a driver’s airbag and the ergonomics of the driver’s workplace were brought up to a totally new level. Seats, steering wheel, switches – numerous elements were already able to be configured individually to the respective driver and field of operation. The dashboard almost wrapped around the driver, such that the incredible number of controls were always within easy reach. Even the display concept had come a long way, with the inclusion of the first digital central display which showed such things as the selected gear and visualisations of any assistance systems which were operating. 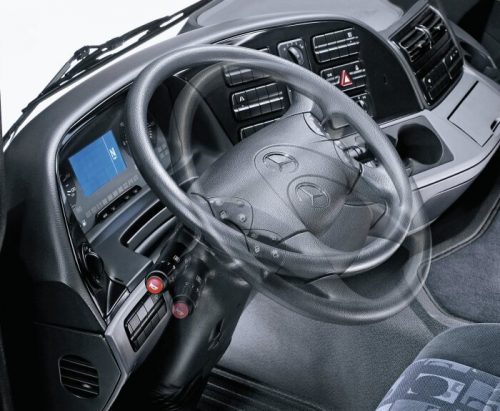 An almost fully digital workplace came in 2018 as a world first in a truck. The Multimedia Cockpit was launched in the fifth generation of the Mercedes-Benz Actros, as shown here in the large image. Two high-resolution screens replace the traditional instrument panel. The central display is individually configured by the driver and, using clear graphics, it also displays the operation of the assistance systems such as Active Drive Assist and Predictive Powertrain Control. The secondary display is a touchscreen display and can be operated like a smartphone. Quick access buttons increase the system’s functionality. Plus, the multifunction steering wheel has turned into something of a switchboard. Now also part of the completely re-worked human-machine interface of the new Actros are the two displays of the MirrorCam which are installed in portrait orientation on the A-pillars. They don’t just show the traffic to the rear of the vehicle. Special displays also help when overtaking, whilst moving image views and variable wide-angle formats of the digital rear view mirror can make taking bends and manoeuvring even safer. What’s more, the Multimedia Cockpit now also forms an interface to the outside world: apps help the driver to fulfil their transport tasks. At the same time, the truck is permanently connected with the cloud via the Truck Data Center, which simultaneously also forms the technical basis for connectivity solutions such as Fleetboard and Mercedes-Benz Uptime.