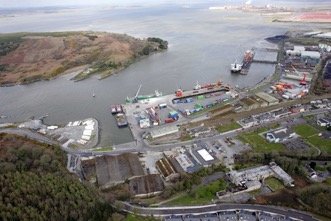 Following the announcement at the end of October by Transport Minister, Shane Ross TD, of the €450m project to upgrade the N69 between Limerick and Foynes by 2026, pressure has been growing for funding to be provided for the currently mothballed rail line to Foynes Port to be re-opened.

The port, handling 10 million tonnes of cargo annually, is currently constricted by poor transport links to the rest of Ireland, but despite this 19% growth was achieved last year. The rail link would require less investment, estimated at €25m (2015 prices) – around 5% of the cost of the road. It potentially could be re-opened several years sooner if work were to commence promptly. A big advantage over the road scheme is that all land along the railway is already owned by CIE.

Shannon Foynes Port Company (SFPC) have been pressing for the re-opening of the line for many years now and were awarded EU funding to carry out a structural survey of it.  Prior to this SFPC had arranged vegetation clearance in early 2015 to enable structural surveys to be carried out to the TEN-T link to the deep water port.

SFPC consider the rail link as an essential part of their €50 million capital investment plan which included the €12.5m scheme for extension of the East Jetty and a new quay construction of 117m to join the East and West Jetties. The throughput of the fast growing port is primarily bulk commodities and there is considerable potential for rail freight development including biomass products, general goods, timber, oil, fertilizer and the export of zinc ore.

The 26¾ mile railway via Limerick is well connected to the south, east, north and Dublin. It was last used for freight traffic in 2001. Rail is very competitive on routes from ports. Currently around 300 maritime containers are moved by rail between the centres of Mayo and Dublin Port each week.

As a bonus, if the line were ready for used by 2026 it could also potentially host a temporary passenger shuttle train for the Ryder Cup with a station located only around 15 minute walk from the Adare golf course – this saving a lot of parking congestion.