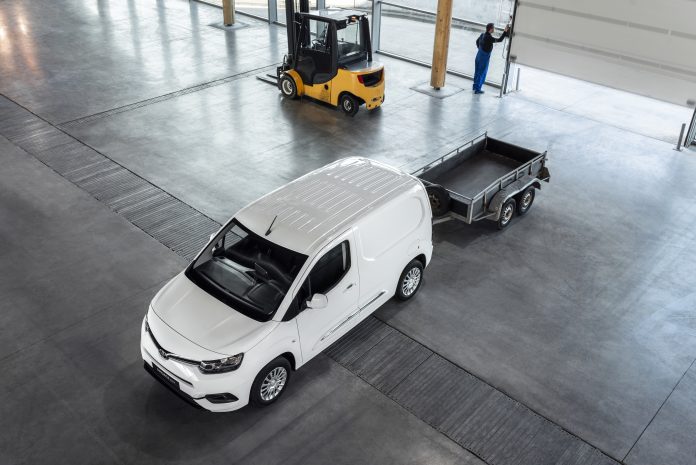 Developed in collaboration with Groupe PSA, Proace City will join the established Proace medium duty van, and the legendary Hilux pick-up in building Toyota’s LCV market presence, competing in segment that’s enjoying steady growth and is on course to achieve around 900,000 sales in Europe by 2021.

The new van provides a perfect fit with the Proace range in terms of size and payloads. Launched in 2016, Proace is approaching a five per cent share of the medium duty van market and is set to record around 30,000 sales in Europe in 2019.

The Proace City range meets a wide range of business needs, with different loading and seating configurations and powertrain options.

The compact van is presented in two different lengths – short at 4.4m and long at 4.7m. Both can be specified with three front seats, and as panel or glass vans; the long version is also available as a crew cab. The passenger version is offered with five or seven seats both in the short and long version.

The dimensions and packaging give Proace City excellent load capacity, with maximum volume from 3.3m3 (short model) to 4.3m3 (long version with Smart Cargo option). Notably the Toyota is one of few vehicles in its class that can accommodate two Euro paletts. Adding the Smart Cargo system option gives best-in-class load length capability of 3.1m for the short version and 3.4m for the long, while the maximum payload is another class-best figure at one tonne (both versions). For those who need to carry even greater or heavier loads, the van can tow braked trailers up to 1.5 tonnes. Asymmetrical rear doors (glazed or unglazed) or a top-hinged tailgate can be specified.

Proace City will be available with a range of petrol and diesel powertrains offering a power spread from 75 to 130 DIN hp, and a choice of five or six-speed manual or eight-speed automatic transmissions.

The model range amply covers business and fleet customer requirements in the segment in terms of capability, versatility, performance and efficiency, ensuring it can realise its potential to strengthen Toyota’s position in the LCV market.

Proace City can be specified with interior configurations to cater for different passenger and load-carrying requirements.

The van is available with either two individual front seats or a three-seat bench, the latter additionally offering a Smart Cargo option, like that seen on the larger Proace model. The Smart Cargo system uses a folding outer passenger seat and a hatch in the bulkhead to provide an extra 0.4 m3 of load space and to increase maximum load length by 1.3 m; the centre passenger seatback can be rotated to create a handy desk space, with additional under-seat storage.

In the crew cab version, when the second row seats are not being used, the bench can be folded flat and the bulkhead moved forwards to increase load space. A hatch in the bulkhead can be opened to carry longer loads.

The Proace City van can be fitted with a rear hatch in the roof as another useful option when longer items need to be carried. This comes with a cross-bar that can support up to 100kg.

Clever and capacious storage points are featured throughout the cabin (according to model), ranging from coin and cup holders and open stowage areas, to an underseat drawer and spaces designed into the roof, doors and floor. In the passenger version, a panoramic roof option can specified with aircraft-style overhead storage in a locker and a central ‘floating’ arch structure that have a combined 74-litre capacity, accessible from the second row seats and the boot.

Access to the boot is made easy when parked in confined spaces, thanks to an opening window in the tailgate.

The Proace City Verso offers flexible passenger accommodation, with the option of three individual seats or a 60:40 split-folding bench in the second row. A third row can be added to both the long and short body versions, with seats large enough and with slide-adjustment to accommodate adults in comfort. When three separate second row seats are specified, each one has Isofix child seat mounts – another unique-in-class feature. All passenger seats fold flat, including the front seat, to maximise load capacity and convenience.

The Proace City benefits from equipment specifications that include a series of features, delivering enhanced safety, a comfortable driving environment and improved performance and practicality, both in van and Verso passenger vehicle versions (NB UK specifications and equipment availability will be confirmed nearer to the time of launch).

The safety features provide high levels of active safety, meeting customer requirements in three different packs. As standard, these include a Pre-Collision System, Road Sign Assist, Lane Keep Assist, Cruise Control and a “coffee cup warning” that recommends the driver takes a break if they have spent a long time at the wheel. The content is increased in as second pack with Automatic High Beam, Sway Warning and an extended Road Sign Assist system, while the most comprehensive package further adds Adaptive Cruise Control and a Blind Spot Monitor. All models also come with eCall for automatic connection with the emergency services in the event of a serious accident.

Where multimedia and connectivity are concerned, Proace City is equipped with an eight-inch touchscreen to access audio and smartphone functions, with MirrorLink, Apple CarPlay (including Siri assistant) and Android Auto (including Google assistant), plus Bluetooth, and USB/Aux-in connections. It can be used with navigation and online functions, including 3D mapping, voice command recognition and connected traffic information (via Tomtom Traffic).

Safety and ease of manoeuvring are supported by a rear-view camera that provides both a 180-degree and overhead dynamic images of the area behind the vehicle, and a static view covering an even wider (180-degree-plus) area. A Blind Spot Monitor warns the driver of other road users moving in their blind spot with an alert in the display audio screen.

A higher level of driver support is provided by Smart Active Vision. This uses two dedicated cameras and a ceiling-mounted five-inch screen to relay a clear, real-time view behind and alongside the vehicle – effectively letting the driver see through the metal panels. A long-distance rear view can be selected when moving or stationary, or a short-distance view when reversing. The view can also be switched to the blind spot on the passenger side of the vehicle.

Proace City’s performance can be adapted to tackle different driving conditions with Toyota Traction Select. Using a rotary controller, the driver can choose between Normal, Snow, Sand and All-terrain modes. Van users can keep a check on their payload with a Smart Load Indicator – another feature unique in the van’s class – that warns when 90 per cent of the maximum weight is reached and adds an alert in the combimeter when the maximum is exceeded.

Other advanced equipment features available for Proace City include a wireless smartphone charger, unique-in-class electric parking brake and, for the passenger version, a panoramic roof with electric shade and a parking assist system.