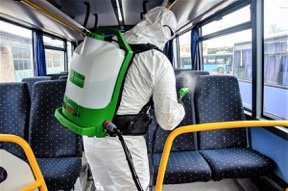 Following a successful inaugural webinar two weeks ago, the hosts Busworld, the trade association that represents Belgian Bus & Coach operators and organisers of the Busworld Brussel (formerly Kortrijk) exhibition organised a second webcast, this time asking the question, ”How can coach operators  generate income and reduce costs during COVID-19?” Fleet Bus & Coach tuned in to get a perspective from other parts of the world and see if the situation in Ireland for operators here differs to the rest of the world.

The Coach business sector has come to a complete halt around the world in the last couple of weeks. Nobody knows how long it will take for the normal activities to restart. Coach companies which cannot bridge the loss of income during the crisis are not sure how to survive, if they can at all. Millions of jobs are threatened in the passenger transport industry and related sectors such as tourist attractions, events, hotels, restaurants, etc.

During the Webinar the main focus of attention was on how companies could look at reducing costs during the lockdown and then be fine-tuned and ready as business starts to get up and running again.

Five top-level managers of coach operating companies from around the world shared their experiences and some of the plans they had for their operations after COVID-19. Members of the guest panel included:

The Busworld Academy Webinar, in partnership with GPN (Global Passenger Network) organised and provided the speakers. GPN is a group of Independent Coach Operators from all over the world. Founded in 2006 by ten operators, it now has members worldwide.

One of the first speakers gave some details of how some operators found opportunities in the midst of this crisis.

o  An Italian operator organised repatriation trips from cruise ships docked around Europe to get passengers back to Airports and their home cities. Some driver training was involved, but it proved lucrative.

o  A Vietnamese operator turned its Inter-city Coach service an Inter-city courier service, this has allowed them to continue some of their operations

o  A Moroccan operator is providing transport for Police and prisoners.

o  A French operator has made some modifications to allow its coaches be used to carry patients between hospitals where an ambulance may not be necessary.

As interesting and original as all these ideas are, in percentage terms, it is a drop in the ocean in comparison to what was required. When it came to cost cutting and preparing for the future, all operators are generally agreed on what the background will be when business starts to move again.

o  Most coaches will be only able to carry 50% of their normal passenger compliment.

o  It seems likely that there will be a requirement for safety masks and gloves.

o  Nobody can be sure if people will travel on buses because of a fear of infection.

o  In every country there is full agreement that Insurance Companies, Banks and Governments will be key to the resumption of business.

Mark Anderson of Anderson Travel in the UK encouraged operators to go back to simple cost awareness and cost cutting. In a brief and targeted presentation, he said, like all operators he had to be careful not to only focus on sales and profit, but not to forget to keep costs in check. He shared some areas looked at in the previous week or so, such as mobile phones usage. He thought that he had the best deal in terms of cost with the mobile phone deal provider, however, over time he discovered that his office staff were calling drivers on their own mobiles for convenience. When the figures were closely looked at it, there were savings of £35k to be gained. In his garage workshop he found there were spare parts in stock for coaches they did not operate for two years. So, he feels when finished this close look at operations there could be more considerable savings to be achieved.

Bearing in mind all of these cost cutting measures, there is no doubt that bus and coach operators will need significant help and support from their Governments.

In Ireland, the Coach Tourism & Transport Council (CTTC) on behalf of its membership is working hard to get the attention of the Government to make sure as a sector it can survive and thrive.

Companies are preparing for Brexit – CILT

Jarlath
Recognizing the critical need for reliable temperature-controlled airfreight solutions for safe transportation of vaccines and pharmaceuticals, Thermo King and Envirotainer has announced that they...

HAZEL Webinar #4 – Hydrogen Application and Use

88 Wrightbus StreetLites for Transport for Ireland