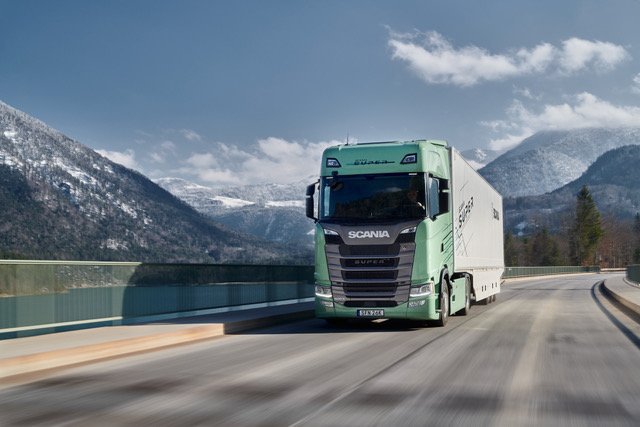 Scania has won the prestigious Green Truck accolade for the sixth year in a row.
This year a new 13-litre Super-based powertrain truck was entered and claimed the overall prize thanks to its outstanding efficiency and fuel performance.
Stefan Dorski, Senior Vice President and Head of Scania Trucks, said: “Winning Green Truck is testament to our achievements and a hallmark for the value that Scania offers. I am extremely pleased that a Scania is ranked as the most transport-efficient truck for the sixth year in a row. Our Super-based powertrain trucks have the same specifications and fuel-saving features that we deliver to our customers, which make them the real winners here. It has brought a completely new perfor­mance level to the market, with our customers now benefiting from its 8% fuel savings.”
The Green Truck comparison test is organised by the leading German trade magazines Trucker and Verkehrs­Rundschau.
They aim to identify the most efficient heavy truck available in Europe by using a formula that considers fuel consumption and average speed. Each truck had to be a 500hp, 4×2 semi-trailer with a total weight of 32 tonnes.
They are then rigorously tested and monitored on the same 340km route on Germany’s highways. The truck is run in parallel alongside a reference vehicle so factors that could influence the results are considered and compensated for.